With time running out on the Talons franchise to find an owner and the last few weeks of the season on the horizon, I was still cranking out cards for the team even through their final hours. I kept going to the games and cheering on the team, but they finished winless at home with some games ending in heartbreak, while others the team just got completely blown out of. The Talons had been completely decimated by injury, and by being only given the green light to play only a month or two before the season, the talent pool had been drained.

When promising prospect Colton Jones went down during the early part of the season, the Talons made a trade with the Iowa Barnstormers to grab Jeremy Schonbrunner. Since joining the AFL in 2012, Jeremy had spent time on the rosters of the Soul (2012), Talons (2013), and Barnstormers (2014). He’d also prove himself in the IFL with the Lehigh Valley Teelhawks gaining valuable experience and playing time. In college at Temple, Jeremy played in 38 contests along the line, and on special teams, with 9 starts coming at Center.

As I was getting the autograph of Shane Boyd for the umpteenth time after the game, Jeremy commented on my cards and said, “If you make one of me, I’ll pay you for it!”, so I set out to make it happen.  In person, with both legs in protective knee braces, Jeremy looks like a stout machine, but there were very few photos of him in action, so I really had to work hard to find something. Unfortunately I was not able to make the final game due to illness, so I contacted him directly and sent the cards to Jeremy via the mail. He signed this card and had it back to me in no time flat. After the Talons ‘suspended’ operations following the 2014 season, Jeremy was signed by the Tampa Bay Storm. 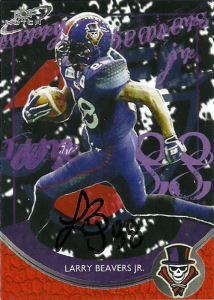