A four-year starter at right guard for USC from 1987 to 1990, Mark Tucker was selected in the 7th round of the 91 NFL Draft by the Atlanta Falcons spending most of the year on the practice squad. The next year he joined the Colts in a similar capacity and then was allocated to the Frankfurt Galaxy of the World League where he spent a season with the squad in 1992.

After the World League reorganized, Mark joined the Arizona Cardinals, playing for them the next two seasons (1993-1994). In the meantime, Mark moonlighted on ‘American Gladiators’ as an injury replacement gladiator named ‘Rebel’. His interesting career journey continued from there spending a season with the Jacksonville Jaguars as an expansion selection in 95. With the following season under his belt with the New Orleans Saints in 96, Tucker decided to take his talents to the Arena Football League, playing for the Arizona Rattlers. He experienced his best football years with the franchise, and played from 1997 to 2006 with the squad.

Mark quickly jumped into coaching offensive and defensive lines for the Rattlers, and then later the New Orleans Voodoo. He moved to the high school ranks, where he has become an acclaimed position coach over the last 20 years.

Vinnie Clark was a member of The Ohio State University from 1988 to 1990. He impressed peers in 1990 when he posted 51 tackles, 3 fumble recoveries, and 6interceptions for 51 yards- which led the Big 10 Conference.  An athletic cornerback with sub 4.35 speed, Vinnie was the 19th player selected overall in 1991 by the Green Bay Packers.

Vinnie played for the Packers from 1991 to 1992. During his time with the Pack, he recorded 15 starts, 4 interceptions, and 68 combined tackles. He joined the Falcons in 1993, and then late in 1994 joined the New Orleans Saints. This turned out oddly to be his best season as a pro, as he had 5 interceptions for 149 yards, 2 forced fumbles, and 73 total tackles.

Clark was selected by the expansion Jacksonville Jaguars in 1995. He’d start every game for the franchise, and record the first interception in the history of the franchise (albeit in the preseason). He’d finish 1995 with 1 interception and 66 tackles. He’d be released 4 games into 1996 and retire.

He’s done a lot of coaching since then, briefly popping up in the Arena league coaching for the Columbus Destroyers. Vinnie is doing well currently as of this post, and is coaching High School Football in Ohio.

Well an obvious set need with the Action Packed 1991 Rookies card, but the GameDay 1992 and the Star Pics cards also found a home close to my heart. Vinnie had a lot of cards to choose from, and these really stood out to me. The Star Pics one just had this garish 1990s feel to it with the montage of footballs in the background/ His uniform with the oversized pads and numbers felt encompassing of the era. Vinnie’s GameDay card is an outstanding action entry. I really like how his whole body is squashed down into the canvas area and compliments the design quite nicely.

I saw a lot of successes for Vinnie fly by while I waited patiently for these cards to return. I had given up on them after a year or so, but Clark must have finally reached the bottom of his mail bag with my cards down there and decided to sign them after a scant 810 days. 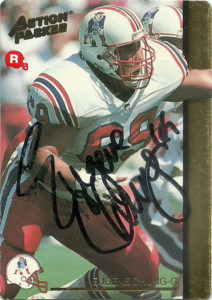