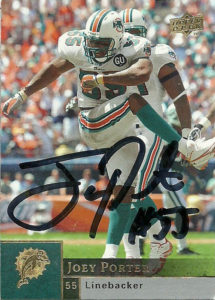 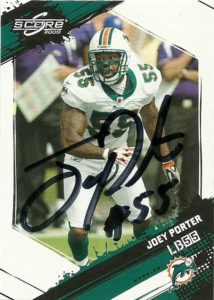 Joey Porter pound for pound was one of the most dominant linebackers of the 2000s.  Taken in the 3rd round of the 1999 draft by the Pittsburgh Steelers, Joey was still pretty raw to the linebacker position, something he had switched to from H-Back during his college days at Colorado State.

He’d bide his time on special teams generally over the course of his rookie year. Still he’d record his first professional touchdown on a forced fumble from Neil O’Donnell.  In 2000, he’d start his first full 16 game slate for the Steelers at right outside linebacker, recording 10.5 sacks, and another fumble that he’d return for a TD- that time as he victimized Eagles quarterback Donovan McNabb. He’d also notch his first career safety.  In 2002, Joey earned his only All Pro nomination, with a career high 60 tackles, and 4 interceptions for 153 yards, to go along with 9 sacks, and 2 forced fumbles.  Porter also went to Hawaii after the season and also in 2004 and 2005 while with the Steelers.

Joey took his show to Miami in 2007 where he was unleashed upon the AFC East. Adding teeth to the Dolphin defense, Joey played all over the field at linebacker, outside linebacker, and at defensive end. In 2008 he’d make one more Pro Bowl, as he had a career high 17.5 sacks.  After the 2009 season, Joey signed with the Arizona Cardinals. He’d play for them through the 2011 season, and then retire after signing a one day contract with the Steelers in 2012.

Joey entered the coaching ranks, first as a defensive assistant at Colorado State in 2013. Afterwards he joined the Steelers in the same capacity, honing his knowledge under then defensive coordinator Dick LeBeau in 2014.  He’d be promoted to linebackers coach in 2015, a capacity in which Joey’s served through 2017.

Among his honors, Joey was named to the NFL 2000’s All Decade team and the Pittsburgh Steelers All-Time Team. In 2016 he also was nominated to the Pro Football Hall of Fame but did not make the final cut. He kindly signed these two cards for me through the Steelers in under 30 days.