I had gotten John way, way back through the Chargers back in 1992, and always had hoped to come back around and get these remaining cards signed by him. He had some really nice and unique images and canvases to work with over the years, and he had a bunch of them.

His GameDay card was something I didn’t even know that really existed. I bought a box of the set in 2017, and was really charmed by this card. It was really what set me into action to go ahead and seek him out for a second pass at some autographs. It’s a pretty well framed shot, despite the slight blur on his left hand.

For some reason, his Score 1990 rookie was somewhat of a rare find initially. I think between myself and my friend Josh we opened 2 or 3 boxes and I just ran across one of these cards. So few players can get away with wearing yellow like this, but John looks pretty solid in that action shot, which represented his earliest rookie card. John’s Stadium Club and Pro Set cards make me feel like I should understand why he won the starting QB job over Billy Joe Tolliver in SD. They both seem to convey this sense of leadership that he has on his almost strained face.

I wasn’t too big a fan of Topps Stadium Club. Their 1991 set had a soft entry into the market, but they really played it up for 1992, and while I sparingly get them autographed, I really liked this card- even the hokey ‘Members Choice’ banner. It’s a really clear, high resolution image, and even John barking out an audible at the line of scrimmage looks impressive.

His Pro Set 1991 card was a part of the update set that was done later, and back then I was just too nervous to risk sending out his ProSet rookie card- little less from the 1991 update set. It’s a great picture, even if Friesz’s throwing motion looks a bit awkward in this image.

As a set I really liked Skybox 1992. It was a well designed and exciting foray into an already burgeoning football card market. (Skybox was able to weather the market longer, and was later purchased by Marvel if I’m correct, and then eventually dissolved when the market completely came apart.) This was one of the few Skybox cards however that didn’t really excite me. The framing of John just seems too perfect while the image itself at just the right distance. Note that neither of his hands or feet are visible, making this shot somewhat unappealing.

John turned around my greedy request in less than 30 days. A friend to the TTM community, John is a solid responder through the mail from Idaho, and graciously signed these 5 cards for me. 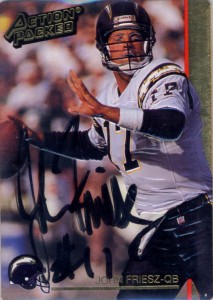