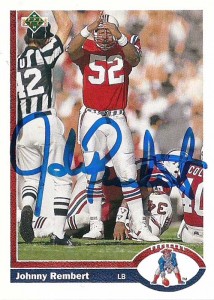 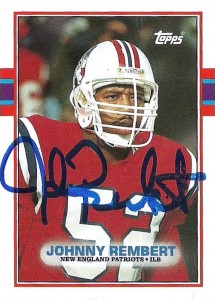 Johnny Rembert was drafted in the 4th round of the 1983 draft out of Clemson. A nice find by the Patriots at just the right place, Rembert would be named to the Pro Bowl twice during his career in 89 and 90 largely because he was a run stopper, recording  137 tacles in 1988, and 122 tackles in 1989.  Injuries began to set in after that and derailed future Probowl attempts. Johnny played 10 seasons for the Patriots starting 72 games at LILB, RILB, and LOLB for the team.

He was named to the Patriots Hall of Fame in 2009 and currently is the Jaguars Quality Control Representative that oversees uniforms.