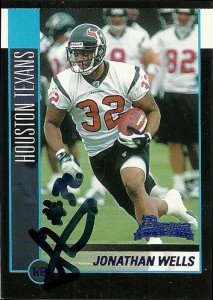 Jonathan Wells played for the Ohio Buckeyes, where he ground out 479 carries for 2,381 yards and 27 touchdowns. He’d be taken at the top of round 4 by the then expansion Houston Texans in 2002.  Wells was expected to back up James Allen who had signed as a free agent, but Jonathan ended up getting the start in the Texans first game against the Dallas Cowboys. He finished the season as the Texans leading rusher with 529 yards and 3 TDs.  After a rough 2003, Jonathan rebounded in 2004 with 82 carries for 299 yards and 3 TDs in a crowded backfield. Splitting time at fullback the following season, Wells started 6 games rushing 90 times for 325 yards and a career high 4 TDs to go along with 22 receptions.  The team sunk to a 2-14 record and head coach Dom Capers was relieved of his duties after the season.  With a new regime installed under new head coach Gary Kubiak, Wells was a free agent. At a tryout with Seattle he blew out his calf and decided to put his energy into something else.

Wells had a nice run in Houston and was the franchise’s first career leading rusher. In addition, Jonathan was captain of the special teams 3 years running. Although Wells and fellow rookie QB David Carr were forced into the lineup right from the start behind a horrible offensive line, Jonathan has no regrets. Currently he’s been involved in record label management and is a big Buckeye fan to this day.