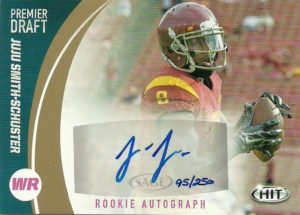 JuJu Smith-Schuster had a very successful career playing wide receiver for USC.  At 6’1″, 220, he possesses all the tools needed to take it to the pros. Over the last two years he caught at least 10 TDs while averaging 14.5 yards per reception.  He finished his career at USC catching 213 passes for 3092 yards and 25 TDs.  Scouts dinged Smith-Schuster for his lack of separation and top speed, but with top end physicality, strong hands, and an uncanny knack to win contested catches, JuJu has drawn comparisons to Anquan Boldin.
Smith-Schuster was overcome with happiness when the Pittsburgh Steelers selected him in the second round of the 2017 draft.