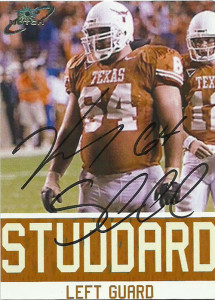 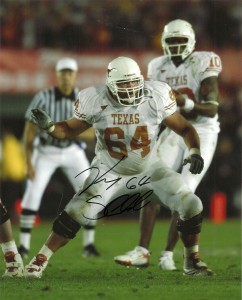 I was really surprised that nobody had made a card of Kasey Studdard. The well decorated Texas offensive lineman culminated his career blocking for Vince Young in the Rose Bowl victory over #1 USC. He was later selected by the Texans in 2007 and later briefly played in 2013 for the Titans. While the former Longhorn only started 13 games over his career, his years of service in the NFL has definitely allowed him to pursue his dreams and personal hobbies.  An avid outdoorsman, Studdard currently dabbles in Sunday morning radio, spends plenty of time working the charity circuit, while he plays golf.  Kasey really liked this custom I did of him. In fact- I think he liked the poster I did of Vince Young more than VY did too. Kasey Studdard had a strong career blocking for the Texas Longhorns from 2003-2006, earning all Big 12 Honors, and Team Captain along the way.  The gritty offensive guard was taken by his hometown Houston Texans with their 6th round pick of the 2007 draft and inserted into their ZBS. Forced into action due to an injury to Ironman Chester Pitts, Studdard started 14 games for the team in 2009.  He’d continue to play for the Texans through 2011, but an injury ended his season and the team opted to not resign him. Restless without football for 2011, Studdard did his time rehabbing and working out to stay in football shape.  The Texans called him up before training camp and resigned him to the squad during 2012, but he’d be cut after the third preseason game. He is quite recognizable to Texans’ fans because of his mangy beard that he has grown out that he claims keeps him cool during the warmer times of the year. (I claim it makes him look like a white version of MMA fighter Kimbo Slice.)

Along with a host of other players at the 610 Fan Fest, I got Kasey and James Kirkendoll without ever setting foot at their table because they were walking around the floor among the crowd. A savvy fan pointed him out, and I was able to go over and score his autograph saving me precious time. I liked this picture of Studdard. They never made a card of him, but I thought this picture captured him in all his glory and grit, and would be perfect for him if they ever did. A popular member of the Longhorns squad, Kasey is considered the model of aggression and grit that fans love from offensive linemen. I am very surprised that Upper Deck didn’t make a Longhorn card of Studdard, but I guess that will have to wait for the ‘second edition’.