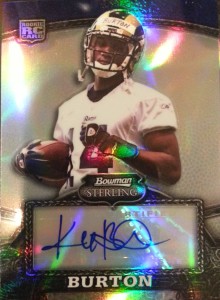 Keenan Burton had a pretty respectable career playing in the SEC for Kentucky- despite nagging injuries that plagued his first two years at the school. In 2006, his first injury free year, Burton caught 77 receptions for 1,036 yards and 12 TDs for the Wildcats. He finished his Senior season, with an additional 66 catches for 741 yards and 9 touchdowns. Invited to the combine, Keenan tested well in many of the metrics and ran a 4.44 40.

Selected 128th overall in the 2008 Draft (4th round) by the St. Louis Rams, Keenan had 13 receptions for 172 yards and a TD his rookie campaign.  Things looked great in Burton’s second season as he led the team with 25 receptions entering Week 10, but after landing awkwardly, he blew out his patella effectively ending his career.