Samkon Gado is one of those rare athletes who wasn’t really on the radar of scouts going into his final year playing college ball. In fact he was looking forward more to becoming a doctor than playing football, but as fate would have it, nearly the entire Liberty runningback corps was depleted, and Samkon stepped in and ran for 901 yards on 138 carries, scoring 11 TDs in 9 games.

It was all about being at the right place, at the right time for Samkon, and it seemed that scouts identified his intangible talent for rising to the occasion. After going undrafted in 2005, he was signed to the Kansas City Chiefs practice squad for a brief time. A month or two later, he was signed by the Packers. Then nearly the entire runningback stable went down one by one due to injury. First Ahman Green, then Najeh Davenport, and then finally Tony Fisher.

Gado saw extensive playing time in their absence after taking the starting runningback role. He’d have 3 100 yard efforts during the season, and set a franchise rookie record rushing for 171 yards against the Lions. Ultimately he too would end his season on injured reserve.

With new management in town for 2006, the Packers traded Gado to the Houston Texans after Week 1 of the season for Vernand Morency. The Texans were shoring up their runningback depth behind Ron Dayne and Wali Lundy. During the season he’d pitch back to back 60 yard efforts against Jacksonville and Buffalo.

In 2007, Ahman Green also joined the Texans runningback committee, and was the starter above Dayne. Gado beat out Lundy to make the final squad, scoring his first TD with the Texans in the season opener against the Colts.

He’d be cut at the end of October, and signed with the Miami Dolphins, after starting RB Ronnie Brown went down. Again, backup Ricky Williams, then himself also was fallen by injury, so Samkon had to step in again. He’d help contribute to the Dolphins only win on the 2007 season.

Samkon then played for the St. Louis Rams over the next two seasons, but saw little action outside of special teams. In 2010 he signed with the Tennessee Titans but did not make the final roster.

Samkon finished his medical degree and now is a doctor at Saint Louis University Hospital as part of the Otolaryngology program. 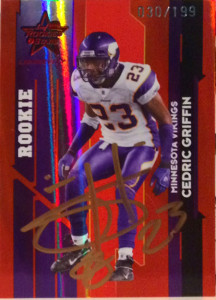 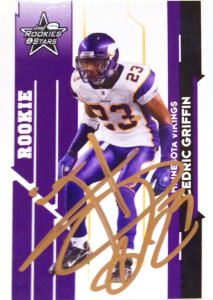 Toughness defines Cedric Griffin- the UT defensive back who conquered personal odds, rose to prominence among DBUT, and then forged his career in the NFL with the Vikings and Redskins. A three year starter in the Longhorns secondary, Griffin was valued for his willingness to contribute on special teams and play any position in the secondary. Gifted with great speed, Cedric was a sure handed tackler who finished with 78 tackles in his Senior campaign.   He started 37 consecutive games for Texas, recording 267 tackles,  3 interceptions, 32 pass breakups, and 5 forced fumbles. 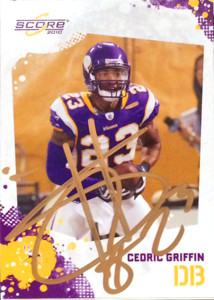 Cedric was drafted by the Minnesota Vikings with their second round pick of the 2006 draft. The Vikings preferred Cedric play corner- a position he appeared in 89 games for the Vikings. He recovered a fumble for a TD, and had a career high 82 tackles in 2007. After the 2011 season, he was allowed to sign via free agency with the Washington Redskins. He played one season with the team and retired after the 2012 season.

I had missed out on Cedric at the UT Neighborhood Bowling Tournament back in 2011, and then later again during the 2015 Memorial Day Flood, so I was determined to finally get his autograph this time around. I went with Shawn and his wife to the Mighty Fine event, and while we sweated it out until the final moments before the event began, it all worked out when Cedric strolled through the door. He kindly signed these 3 cards for me. I would’ve penned him on a 4th but I gave the Adrenalyn card to Shawn so that he had an extra item to get signed. A really nice signature encapsulated by the bronze color, Cedric told me he that it was a great change of pace and a lot of fun playing for the Redskins. Okay so David Anderson’s story really proves how small the world is to me. I adopted the Texans as my primary team in 2002 and followed them religiously. I was amongst the throng of people who said, “What?” when the Texans took Mario Williams with the first pick of the 2006 draft. It would prove to be the franchise’s best draft, with Williams, Ryans, Winston, Daniels and Anderson all coming out of it with Williams, Ryans and Daniels have all being named to the ProBowl. Dave was the Texans final pick of their draft taken in the 7th round on the 251st pick and I thought the pick was right where it should be. A great reciever at Colorado State, he basically owned all the records at the position when he left. I watched him blow up teams in the preseason in 2006 as Dave was gunning for a job. He’d end up making the team, but would find himself cut and brought back. (Dave later would switch numbers from 14 to 89, because he wanted a ‘real wide receiver number’, after his rookie season.) Dave saw increased playing time as well starting one game in 2008, and 8 games in 2009.  Not the fastest or biggest player on the team, Anderson has solid hands- a fact he attributes to his brother throwing lightning hard footballs at him as a child. (Unofficially, he also has one of the highest thrown to/reception percentages in the league to support this as well.) He’s also a willing blocker and adequate hitter. In 2008 after catching his first professional touchdown, Anderson did Conan O’Brien’s shoestring dance, catching the latter’s attention. Anderson would capitalize off of this making an appearance on O’Brien’s late night show. In 2009, Dave would see time at tight end for the team, pulling down a career high 36 balls emphasizing his ‘do it all mentality’.  After being under utilized by the team in 2010, Anderson would see some time at punt returner, and occasionally back in the slot. In week 14 he grabbed three catches against the Ravens and appeared poised for a good game, but separated his shoulder and missed the rest of the season. He’d finish the year with a paltry 117 yards on 11 catches.

In Spring of 2009, while I was a teacher’s assistant at school, I ran into another football fan- which is a rarity at an art school. I explained to the other fan that I was a Houston Texans fan.  In busts David Anderson’s brother, Erik, questioning me about my loyalties to the franchise, so I had to make perfectly clear that the Oilers retired the day they left Houston- and that the Titans are my arch enemies. He then asked me if I knew who his brother was, quickly trailing off that most people don’t have a clue who David Anderson is. My rebuttal was speedy robotically automatic pulling Dave’s draft card from my brain. We became fast friends. As I helped Erik through the class, he and I would discuss the franchise.  One week during 2009 he brought me in a football from Dave completely signed by the team and retriggering my autograph hobby. I’d meet Dave at their parents’ house in the 2010 post season, where he signed a card or two more for me and took a photo with me. It was illuminating for me as a fan to discuss the league, the fans, and the franchise with him, and it gave me great insight and patience into the inner-workings of the sport. Here’s a picture of Dave and I after we took in the Colts game against the Jets in the playoffs of 2010. In addition you will also find a video about the string dance.