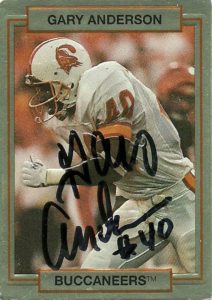 Arkansas runningback Gary Anderson has had quite a long career in many leagues. He played from 1979 to 1982 for the Razorbacks, compiling 1,999 yards rushing on 392 carries, scoring 10 TDs, and displaying soft hands catching 94 passes for 1,075 yards and 8 TDs. Selected in 1983 by the San Diego Chargers- Gary opted to play for the upstart USFL instead.

After the New Jersey Generals traded Anderson’s rights to the Tampa Bay Bandits, he became the go to back in Steve Spurrier’s Banditball offense. He’d finish 4th in the league with 2,731 yards and 39 touchdowns during his time in the league before it folded up shop. 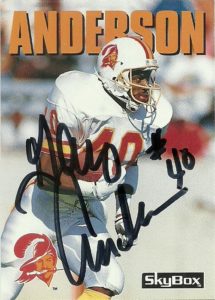 By the time Anderson got around to the Chargers, San Diego wasn’t really sure what to do with him, when they had a West Coast attack powered by future HoF QB Dan Fouts. Gary in the meantime handled kick return duties and posted sub-400 yard rushing seasons. Gary also caught a lot of passes, earning his only Pro Bowl berth in 1986 as a jack of all trades when he had 80 catches for 871 yards and 8 TDs along with 442 yards rushing, 482 yards kick returning, and 227 yards punt returning. He later posted a career high 1,119 yards on 225 carries in 1988. After an acrimonious holdout that wiped out his 1989 season, Gary was traded to the Tampa Bay Buccaneers.

He had a pretty decent 1990 season in which he posted 1110 total yards from scrimmage, and although the rest of his career in the NFL was largely injury riddled, Gary was enshrined into Tecmo Super Bowl lore- as an extremely underrated back. He’d split time with the Bucs and Lions in his final year in the NFL (1993).

After a year off Gary returned to football to play for the CFL USA initiative and the Memphis MadDogs in 1995. He’d be released in camp the following year by the Roughriders.

In 2006, Gary was inducted into the Arkansas Sports Hall of Fame. Of note, if you calculate all of Gary’s time between the three leagues, he has over 14,500 yards from scrimmage.

I had tried to get his autograph a few years ago. He checked many of the odd boxes that I liked: 80s runningback, Action Packed Rookies card, and a player on Tecmo Super Bowl. I missed out on him because in his hometown there is a Court and a Cove that have the same street name but are in totally different places. Thankfully after a second attempt I was able to knock the former elusive back out.  This Action Packed card, like many in the set, was quite common, but it is a good action shot and the emboss shows up well on it. The SkyBox 1992 was another one of my favorite sets of that era. With the large name at the top and crystal clear photography, it really set itself apart from the competition.