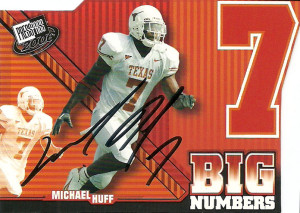 Michael Huff is another member of DBU (The University of Texas), to make it to the NFL. Among colleges, UT ranks #1 in defensive backs who have been drafted to or played on NFL rosters. A track and football star in High School, it was a no brainer that colleges coveted Huff’s speed and athleticism. He signed with the University of Texas and played there from 2002-2005. A key cog of the UT defense that stymied USC from winning its 3rd consecutive National Championship in 2005, Huff also won the Jim Thorpe Award after the season concluded. He finished his college career at UT with

The Raiders drafted Michael with the 7th overall pick of the 2006 NFL draft.  Since then Huff has experienced some extreme highs and lows during his NFL tenure. A carousel at head coach, constant changes in defensive staffs, and changing positions didn’t help Huff very much. He’d be named starter at strong safety his rookie year and respond with 78 tackles. Moved to free safety in 2007, Huff had a rough transition and was benched. He’d split time going forward through the end of 2009. Michael in 2010 earned his first AP nomination for his solid season, recording 94 tackles, 3 picks, 3 FF, and 4 sacks. In 2011, Huff was best remembered for his game ending interception of quarterback Matt Schaub in the endzone that preserved the Raiders victory over a furious Texans comeback. (The game is notable as it was the first game played by the Raiders after owner Al Davis’ death.)  Injuries beset the Raiders during the 2012 season. An already weak secondary prompted Huff’s move to cornerback by the team. He’d be cut after the season by the team primarily in a cost cutting move. Michael signed as a free agent with the Baltimore Ravens in 2013, replacing Ed Reed, but found himself by the end of the season on the roster of the Denver Broncos. He did not return to the franchise in 2014 and is a free agent.