Mike’s career continued after his release from the Cardinals. In 2018, he signed with the fledgling Alliance of American Football. (I recognized the name immediately when he was assigned to the Arizona Hotshots thanks in part to the league’s territorial allocation.) Later in the year- perhaps out of the fact that some teams were unfairly blessed with an abundance at quarterback, the AAF decided to hold a Pick or Protect draft, to balance out the rosters a bit.

Mike was taken at the top of Round 2 by the San Diego Fleet, where it was planned he’d grow under the tutelage of offensive mastermind Mike Martz, and behind overall #1 pick Josh Johnson. This didn’t happen because almost immediately after the draft, Josh signed with the NFL Washington Redskins. Moving ahead with Berco at starting quarterback allowed the Fleet to plan around him however and prepare him for the rigors of the AAF season.

I didn’t get Mike’s autograph before the first game in league history, even though they were practicing only a few feet from me. I didn’t realize how he’d be a poster boy for the league in the league’s brief highlight film.

“Hey, whatever this league needs to get people excited, if that’s what it takes, then I’ll take the bullet.”

-Mike Bercovici (on ‘the hit’)

The Commanders ended up beating the Fleet on opening night in San Antonio, punctuated by 6 sacks and 2 interceptions. One of those sacks, LB Shaan Washington came across the line and almost decapitated Mike Bercovici from his blindside. The crowd was dead silent fora brief second as we looked around, and then erupted into a gladiator-like rousing applause at the fact that there was no flag. I thought that perhaps he suffered a concussion, but at some point during that game, Berco was sat for Philip Nelson.

Mike regained the starting position a few games later after Nelson went down with an injury. He’d complete 22 or 43 passes (304 yards) with a TD, leading the Fleet to the game winning drive over the Stallions 27-25. In fact he’d throw for 300 yards in the next two games as well, against the Iron (311 yards) and the Hotshots (310 yards).

Despite Mike’s struggles, he was quite lovable as a quarterback. He finished with 5 TDs to 9 picks, on 51% completions with 1,311 yards. His numbers are actually all the more impressive because he only started 4 games. The league folded after Week 8, and Mike decided to hang up his cleats and go into coaching.

He currently works as a graduate assistant at Arizona State.

I really wanted Mike’s autograph on these cards of his, and after a bit of digging, missing on an address, and a little help from Mark’s Signing Bonus, I was able to track him down on these great cards of his. I liked Berco and I had high hopes that he’d make a great ambassador of the league as the AAF moved forward. 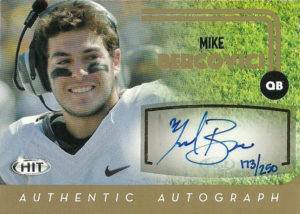 Mike Bercovici picked up for Brock Osweiler at QB for the Arizona State Sun Devils. The backup finally started seeing action in 8 games during 2014, throwing for 1,445 yards, with 12 touchdowns to just 4 interceptions. In his Senior year, Mike started 13 games en route to a banner year throwing for 3,854 yards (318 completions on 531 attempts), 30 touchdowns and 9 interceptions.  While Mike displayed a zip on the ball that surprised many scouts, they picked apart his decision making and deep ball accuracy. Still many scouts were intrigued by his arm strength and competitiveness.

Mike went unselected in the 2016 NFL Draft. He’d become a focus of the NFL Network show Undrafted during his free agent quest to find a team. While he’d latch on to the Chargers through camp, he’d be released during final cutdowns in both 2016 and 2017. Mike joined the Cardinals practice squad during 2017 but after a month on the squad he was released. Currently he is a free agent.

I liked these Sage issues from 2016 though the type of the gold versions of the cards would get lost in the grass texture. Mike has a pretty nice looking autograph too. The M has just the right amount of point to it, while the B has a strong loop to it.