Deacon Jones was the player who coined the term ‘sacks’ and brought more glamour to the defensive end position than ever before. With limited college experience playing for South Carolina State in 58 and then Mississippi Vocational College in 60, Jones was an afterthought in most team’s minds during the 1961 draft. Purely found by accident, Deacon was selected by the Los Angeles Rams in the 14th round.

He joined Merlin Olsen, Rosey Grier, and Lamar Lundy to form the ‘Fearsome Foursome’ which terrorized opposing offenses. He’d go on to play the next 11 seasons for the Rams, earning 7 Pro Bowl appearances, 7 1st or 2nd team All-Pro nominations, and 2 NFL Defensive Player of the Year honors while with the Rams. Sacks at that time were not an officially recorded statistic however using archival film, Jones was credited with 22 sacks both in 1964 and 1968, and 21.5 in 1967. Over his time with the Rams- in 8 of 12 seasons he had at least 12 sacks.

In 1972, Deacon was traded to the San Diego Chargers where he played two more seasons, and a final year with the Redskins in 1973 before retiring.

Jones went into acting and philanthropy after retirement. He was also an outspoken advocate for bringing the NFL back to LA, and referred to the LA Rams and St. Louis Rams as two separate franchises. He was elected to the Pro Football Hall of Fame in 1980, and was named to the NFL’s 75th Anniversary team in 1994. His number was retired by the Rams in 2009- ironically while it was still in St. Louis.

He passed away in 2013, and the NFL in tribute to him created the Deacon Jones award, given away annually to the league leader in sacks.

Deacon Jones was a player I never thought in my wildest dreams I’d ever get, but with the way the card market currently is with the inflated prices of boxes, I’d rather just buy a certified HOFer from one of my favorite sets than buy a 2020 hobby box of scrubs. I had some extra EBay bucks left over so it made this purchase way more palatable, but I did get this at a bargain price to begin with so I was pretty happy. 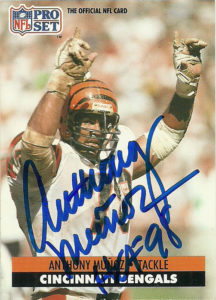 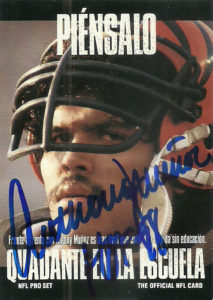