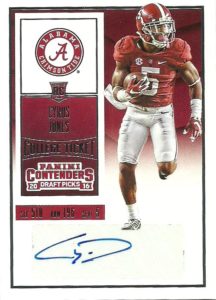 Cyrus Jones was an intriguing prospect coming out of Alabama in 2016.  A decorated punt return and cover man, Jones was a bit undersized for the pro level, but the Patriots liked what they saw and selected Jones in the second round of the 2016 draft. It was a rough debut to say the least for Cyrus, but give Bill Belichick and his staff credit for not giving up on him.

Cyrus finished with 7 tackles on defense, as he contributed mainly on special teams. There he had 11 punt returns for 46 yards, and 8 kick offs for 180. While his bottom line wasn’t horrible for a rookie, it’s the fact that he fumbled 5 times (recovering 2) that really got him in trouble.  It was difficult for Cyrus. Even though the Patriots won the Super Bowl with him, he didn’t really feel a part of it, because of his performance that ended with him on the bench.

Cyrus wanted to become a better player and opted to spend his offseason training for 2017.  Things were looking up for the young speedster, until he suffered a torn ACL in training camp, ending his season before it began. 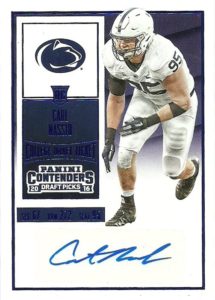 Carl Nassib has a nice frame clocking in at 6’7″, 277.  A great story out of Penn State, Nassib was a walk on with a motor that never quit. In his final year at Penn State, Carl led the nation with 15.5 sacks (single season sack record) and 6 forced fumbles from defensive end.  Going into the 2016 draft a lot of scouts liked what they saw, but felt that Carl was still pretty raw. The Cleveland Browns selected Carl near the top of round 3 and he played a fair amount during his rookie season despite suffering from a broken hand. The former Nittany Lion started 3 games and earned 15 tackles, 4 pass defensed, and 2.5 sacks. 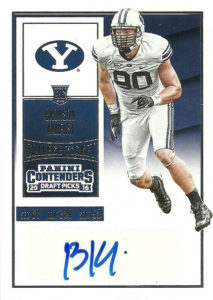 At BYU Bronson Kaufusi was a two-sport athlete, playing basketball in 2012-13 before turning his full attention to football. He had 15.5 career sacks entering the 2015 season, then added 11 more in an outstanding senior campaign while making 20 tackles for loss. Over his career at BYU, he racked up 44 TFL- 3rd best in school history.  A tweener Kaufusi played up and down the line for the Cougars during his time with the team. Bronson went in the 3rd round to the Baltimore Ravens during the 2016 Draft, but during camp broke his ankle, ending his season before it began. The Ravens have Bronson listed as a defensive end.