Ed Meador is not a household name outside of the banner guard of the pre-St. Louis Los Angeles Rams, however he has an impressive resume, that has somehow slipped past Pro Football HoF induction.

Ed played for Arkansas Tech from 1955-1958. Back then players went both ways, and Meador distinguished himself as both a dangerous defensive back, but also as a top flight runner and return man. An all-conference selection 3 times, and Little American his Senior year, Ed was co-captain of the squad know as ‘The Wonder Boys’, and scored 272 career points over his time at Tech. He’d be selected in the 7th round of the 1969 NFL Draft.

The rest is history. He’d spend time returning kicks, holding kicks, and playing defensive back. After seeing time early in his career at corner, the Rams switched him to Free Safety where he excelled. Nicknamed ‘The Rams Little Assassin’, Ed owns multiple Rams career records to this day including interceptions (46), fumble recoveries (18), and blocked kicks (10). A 6 time Pro Bowler (1960, 1964-1968), 6 time First or Second Team All-Pro, and a member of the NFL 1960s All-Decade team, it is surprising that Meador’s name has not received a Canton induction.

In addition to his numerous on the field accomplishments, Ed won the NFLPA Byron Whizzer White Award in 1969. Retiring after 1970, Meador was inducted into the Arkansas Sports HoF in 1978, and worked in real estate for a few years before edging his way into jewelry.

Ed signed these two cards of his pretty quickly. Oddly enough both of these cards represent sets that I only had one other card from those sets signed, and they were both acquired many, many years ago. I wasn’t really a fan of Topps 1969. It strictly is more about the player than the design, and with limited technology to do so back then, this card just comes off very plain. The Action Packed 1991 Whizzer White card is really nice though. The only tweaks they did from the base 91 set is changing the marquee to a silver color and adding the helmeted year of the winner on it. It’s a great card of Ed and I am glad that he could sign it for me- even if it was in a ball point pen. 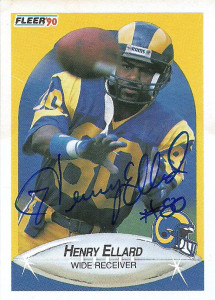 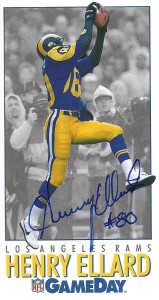