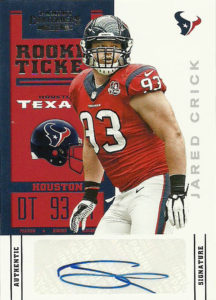 Jared Crick was the other big playmaker on Nebraska’s line along side Ndamukong Suh.  He came on his Sophomore season, with 70 tackles, 12.5 TFL, and 9.5 sacks in 2009. In 2010, Crick matched his previous efforts with 9.5 sacks, 14.5 TFL, and 70 tackles. A torn pectoral muscle in 2011 maligned his campaign, and dropped his draft stock. The Houston Texans wanted to groom some talent behind Antonio Smith and JJ Watt. They felt they got good value selecting Jared in the 5th round of the 2012 draft.

In the Texans 3-4 defense Crick saw only spot duty his first two years. It wasn’t until 2014 that he really saw extensive action as a starter. Still as a 3-4 defensive end, he was able to contribute 29 tackles, 3.5 sacks, and 6 pass defensed.  His 2015 campaign netted him another 2 sacks, 28 tackles, and a forced fumble.  After the season, Jared was allowed to bolt for greener pastures, signing with the Denver Broncos, reuniting him with former head coach Gary Kubiak and defensive mastermind, Wade Philips. Jared has slowly blossomed in Denver becoming a consistent force on the line for the Broncos, posting 48 tackles and 2 sacks in 2015, and 53 tackles and 3 sacks in 2016. 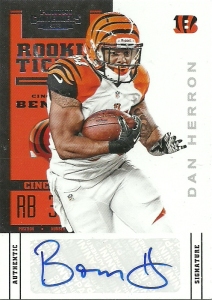