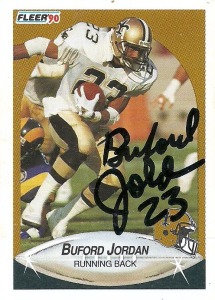 Buford is a legend that has never really gotten his due outside of the state of Louisiana.  After setting state rushing records at little McNeese State, Buford stayed at home with the USFL New Orleans Breakers. As star runningback Marcus Dupree limped through the season, Jordan ended up leading the team with 1,276 yards and 8 TDs in 1984. With the USFL deciding to go head to head with the NFL in the Fall, the Breakers were left in the lurch, so the franchise packed its bags and moved to Portland. Jordan still put together a respectable 817 yards and 5 TDs, averaging right at 5 yards per carry.

After the franchise- and the league folded, Buford was not selected in the Supplemental Draft of USFL and CFL players in 1985. He’d join the New Orleans Saints  as a free agent and crack the squad playing mainly on special teams and at fullback. Jordan saw some starting time, and was an unheralded member of the squad, being at the right place at the right time saving the day for the Saints on more than a few occasions. Buford played for the Saints through the 1990 season, and was resigned for part of the ’91 campaign. He retired after the 1992 season.

After football, Jordan has been inducted into the Louisiana Sports Hall of Fame (2011), and numerous honors from the Southland Conference for his contributions. He’s a personal trainer in Louisiana, providing fitness camps, speed & conditioning, skills & agility, and draft preparation through his Rock Hard Performance outdoor training facility in Kenner, LA.