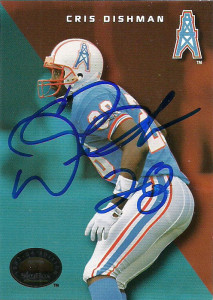 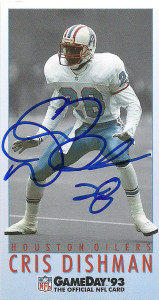 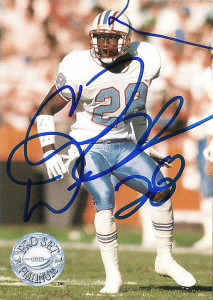 Tim Green is almost as famous for what he has done off the field since retiring from football as he was during  his heyday playing years for the Syracuse Fighting Orangemen and the Atlanta Falcons.  Tim Green had a great career at Syracuse. The star defensive end finished his time there with 341 tackles and set the school mark for sacks in a season (15), and in a career (45.5).  Atlanta was direly trying to shore up their 3-4 defensive front, and took Tony Casillas #2, and Tim at #17 during the 1986 NFL Draft. Injuries really wrecked Green’s first 3 campaigns as he’d only start 11 contests over that period. It’d be in 1989 that he was finally able to show his stuff. Injury free, he ranked 3rd on the team with 5 sacks, and 111 tackles. Considered undersized for the position at 6-2, 249, Tim used his quickness and a variety of moves to put constant pressure on opposing quarterbacks.  He’d lead the team in 1990, with 6 sacks and 37 quarterback hurries.  Green again repeated the feat in 1991 as the team leader in sacks with 5. He’d add 3 more sacks to his resume in 1992, and switch to linebacker in his final season during the 1993 season.

Since then Tim has put his pen to paper and written many books. Green also revealed that he suffered some 12 concussions over his playing time in the league. He finished his law degree in 1994 and has been involved with a few firms, but has been active in coaching and commentating on TV, as well as radio for NPR. At one point his name was linked to the open Syracuse job, but ultimately he nobly recommended competing candidate Doug Marrone. Green was inducted into the Greater Syracuse Hall of Fame in 1995 and the College Football Hall of Fame in 2001. “And with the 34th pick in the 1991 NFL draft, The New York Jets select: Browning Nagle, Quarterback, Louisville.”  Perhaps most notably known as the pick right after Brett Favre, Browning Nagle comes from a long line of NFL drafted quarterbacks from Louisville, KY. The team went quarterback surprisingly, (despite a glaring need for defense,) enchanted by Nagle’s strength and velocity on the ball. After a quiet rookie season on the bench learning the ropes behind Ken O’Brien, Nagle would step into the starting lineup for the Jets in 1992. In 14 games he’d throw 7 touchdowns and for 2280 yards, but he’d turn the ball over 29 times (12 fumbles and 17 interceptions). When Boomer Esiason arrived the following season Nagle headed back to the bench where after the 1993 season I’d meet him at the CGA Youth Golf Tournament and get his autograph. In 1994, he’d sign with the Colts and finish out his 1995 and 1996 on the Falcons.  After sitting out 1997 and 1998 Nagle would play two seasons in the Arena leagues, for the Predators (1999) and Buffalo Destroyers (2000) before retiring from football. His two seasons in the AFL were pretty good in respect to his NFL work. (553 att, 303 comp, 54.8%, 4120 yards, 74 td, 18 int, 98.6 rat)

In one of my fonder moments on the first day of the CGA Youth Golf Tournament in 1993,  I met Billy Joe Tolliver, Browning Nagle and Steve Bartkowski on the course. They liked my likenesses I drew of them so much they signed everything I had of them. We talked football for a few minutes and I rode around on the course with them for a hole. Since football, Nagle has been working at Medtronic as a senior marketing manager and is extremely active in the celebrity golf tournament network. Below are his NFL stats.