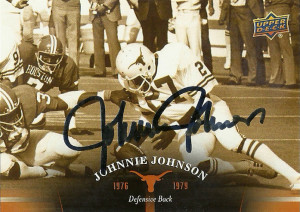 Johnnie Johnson is another member of the Texas’ DBU connection. He boasts an impressive resume that includes winning the 1978 Defensive Back of the Year Award (before the advent of the Jim Thorpe Award), and was a two time All-American. He was also an accomplished speedster and returner, finishing with 114 punt returns for 1004 yards and a TD.  During his time at UT he anchored a secondary that consistently ranked among the tops in the nation. 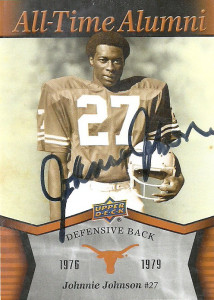 A first round draft choice of the Los Angeles Rams in 1980, Johnnie was selected 20th overall. In his rookie year, he’d start all 16 games. Quickly Johnson asserted himself as a force in the secondary, returning an interception for a team record 99 yards for a TD against the Packers.  He’d also recover 5 fumbles that rookie season.

Johnnie continued to have a nose for the football, recovering 22 fumbles during his career that spanned 10 seasons in the NFL earning an All-Pro nomination in 1983. Johnnie also had a habit of finding the end zone recording 4 TDs. He played nearly his entire career for the Rams, eventually even seeing Longhorn Jerry Gray also join him in the secondary. In 1989, Johnnie signed with the Seattle Seahawks via Plan B as his age became a liability.  After 2 games, the Seahawks cut Johnson due to the pounding that he took on his knees from the Kingdome turf. Johnson retired and started signing real estate, but the Rams came calling, needing depth in the secondary- and Johnson couldn’t resist one last go round. He’d retire for good after the season. 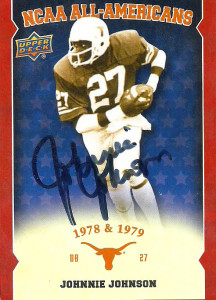 Johnnie was one of the more venerable and popular players on the LA Rams during his career. He was inducted into the College Football Hall of Fame in 2007. Johnson is president of World Class Coaches- an organization committed to teaching basic fundamentals as part of its basic coaching instructional delivery process. He also is a member of the Moving Families Initiative, which helps kids adjust to the challenges that they face when moving to new schools and neighborhoods.