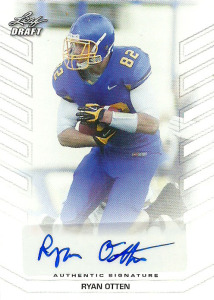 As a junior in 2011, Ryan Otten played 11 games and had 52 receptions for 739 yards and 5 touchdowns, earning an All-WAC selection.  He earned a followup All-WAC selection in 2012, when he had had 47 receptions for 742 yards and 4 touchdowns. Notably his 15.8 yards per catch led all Division I tight ends in 2012, and he joined Notre Dame’s Tyler Eifert as the only two tight ends who ranked in the top 100 nationally in both receptions and receiving yards per game in 2011.

Oddly Otten would not be selected in the 2013 NFL Draft due to average speed and lack of bulk. The Jaguars signed him as a priority free agent . Later that year he’d be on the practice squad of the Chargers. In 2014, Otten signed a futures contract with the Bengals, and then later joined the Vikings who he played for through 2015.