I pretty much pegged that Trevor Knight would show up at the season holders ticket party for the San Antonio Commanders unveiling party, being that he is an SA native.  Once the team had announced that he was a member of the franchise I rushed to find any cards of his. I was surprised to find that Sage had made both a base set card of his and also a Peak Performance card- which I luckily got in the last box I broke into a few weeks before the event.

He wandered up with his family to the gates and blended in. It was a pretty low key introductory event for fans and players. It was easy to go up and talk to Trevor. He did not have his card, so I gave him the two extra I had, to which he told me that, “I was the man.” (Lol. Anyway- compliment taken.) We talked for a few minutes and he caught me up on his NFL travels. After a short stint in Arizona, he landed on the Falcons roster- but broke a few bones in his back ending his time there.

Trevor split college ball time at both Oklahoma and Texas A&M. Losing out to Baker Mayfield for the QB job in 2015- Knight bolted down to AtM to play for the Aggies in 2016. There he had his finest college season completing 193 of 362 passes for 2432 yards, 19 touchdowns to 7 interceptions. A dual threat on the ground, he rushed 102 times for 614 yards and 10 TDs.

Trevor is from San Antonio, so it makes sense that he plays in his hometown for the Comamnders, but the team saw otherwise. Apparently the Commanders were stocked at quarterback, with Dustin Vaughan, Trevor, and Luis Perez all coveted by other teams around the league. The AAF decided to balance out the QB position on the rosters of each team by holding a QB Draft in which you pick or protect a player each round. The consensus was that SA was going to hang onto Knight, but in a surprise- the Commanders opted to keep former Dallas Cowboy Dustin Vaughan instead. Trevor didn’t have to wait long to hear his named called as later that round the Arizona Hotshots selected him with their 6th pick.

Instead of starting Trevor at QB, the Hotshots went with John Wolford. Knight settled into the backup role and has seen some spot duty. His most extensive action came during week 3 against the Stallions when he threw for 95 yards on 8 of 18 throws. He scored his first TD of the season against the Fleet in week 7 when he rushed 4 times for 10 yards.

Knight remembered me from the meet and greet and came over to sign his AAF card with Wolford during that final game in San Antonio. I still think he’s got the juice and might find a home in the XFL in 2020. 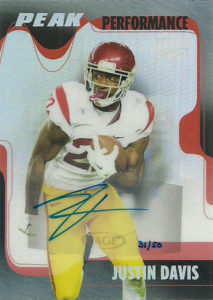 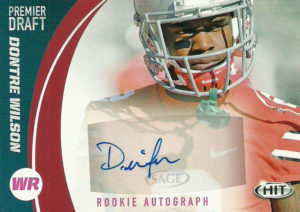 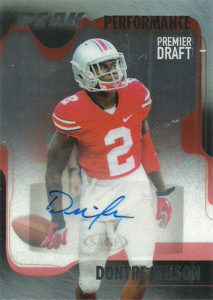 Dontre Wilson played college ball for Ohio State. A school known for cranking out NFL grade talent, Dontre WIlson was not selected in the 2017 Draft, thanks in part to injuries incurred over his college career. During his time at the Horseshoe, Dontre rushed, received, kick returned, and punt returned for the Buckeyes. He finished with 77 receptions for 925 yards and 10 TDs, rushed 65 times for 428 yards and 2 TDs, had 53 kick returns for 1280 yards, and 31 punt returns for 243 yards.

Dontre initially was rumored to be signing with the Chargers, but a doctor scuttled the free agent contract because of a previous foot injury.  Dontre signed as a free agent with the BC Lions in October of 2017 and spent the remainder of the season on the franchise’s practice squad.

I really like these Peak Performance insert cards. They look great with autographs on them. The design on them seems random enough, but the gloss, finish and colors are all very vibrant, making the player pop from the canvas.