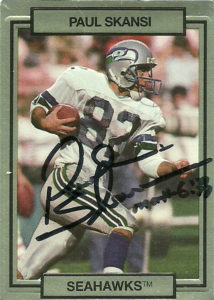 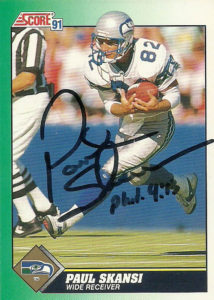 Paul Skansi is an interesting figure in the history of Seahawks football. I always viewed him as an important participant and observer in the growth of the sport that always seemed to fly under the radar. Skansi is a member of Seahawks- or as I knew them- the pink clad Seattle Knights of Tecmo Bowl. He then returned to play in Tecmo Super Bowl as well. In the midst of this, as the great card rush occurred during the late 80s and 90s, Skansi had numerous football cards of him produced. Now as a key role player for the team, it was surprising that Topps, Score, and even Action Packed produced cards of the tenacious receiver- but ProSet (the biggest card set of the market) did not.  I remember him in that first pack of Action Packed I ever opened, because his name is so unique. 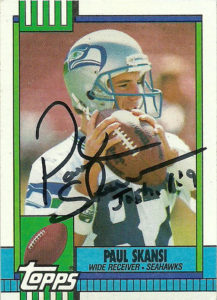 Paul, with his impressive hands and fearless and precise route running, was quite the find for the Seahawks. A local product from the University of Washington, he was a Steve Pelluer favorite. He helped the Huskies win an improbable and exciting Apple Cup with his circus TD catch in 1981. He’d conclude his career at the college with 161 receptions – which still ranks 5th all time on the school’s record books.

Originally a 5th round pick of the Steelers in 1983, he found himself on his hometown Seahawks by 1984. There he became a valued and fearless slot man that was counted on for numerous first downs to keep the chains moving. While he was always overshadowed by the likes of Brian Blades and Steve Largent, Skansi worked best in 3rd down situations.  Initially he also saw time on punt return duties as well. He’d play the next 7 seasons in Seattle, and then briefly try his hand in the CFL with the Ottawa Rough Riders  in 1992.  Skansi’s shining moment came in a thrilling matchup against the Kansas City Chiefs in 1990. As Derrick Thomas played havoc with the Seahawks offensive line all day, Seattle’s offense hung around. In the closing moments trailing 16-10, quarterback Dave Kreig threw a bullet over the middle for 25 yards to Paul for the winning TD.

Paul since his playing days has done a lot of coaching and scouting. After coaching his way through the college ranks, Skansi has joined the Chargers where he’s been a scout for the last 17 years.  He lives outside of Seattle, and always loves to talk Huskies football.

He was kind enough to write testaments on all his cards.

Matthew 6:33
33 But seek first his kingdom and his righteousness, and all these things will be given to you as well.

Philippians 4:13
13 I can do all this through him who gives me strength.

Joshua 1:9
9 Have I not commanded you? Be strong and courageous. Do not be afraid; do not be discouraged, for the LORD your God will be with you wherever you go.”

He also enclosed a nice note thanking me for writing him.  As always, players like Paul are the ones I love to get the autographs from, as they always add to the memory I already have of them. 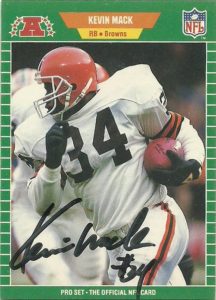 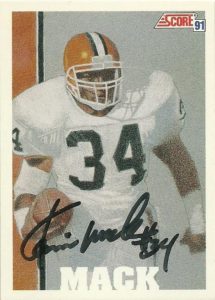 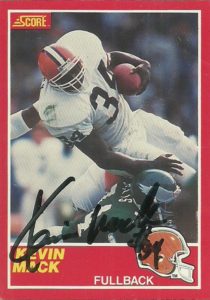 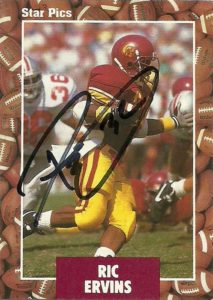 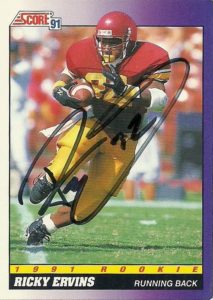 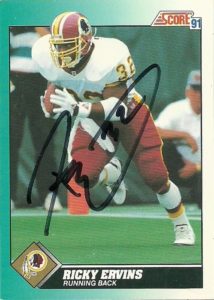 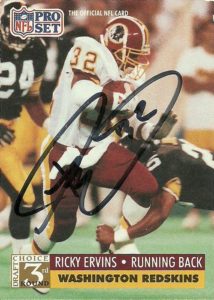 I had wondered at some points if I had walked on the same streets where Ricky  grew up in Pasadena, CA and then later went to college at USC.  He has a stack of really nice cards from during the heyday of my collecting years, and Ricky is a really kind and reliable signer through the mail, so I thought I’d dig out the best and revisit him.

I really liked Ricky’s photo from his Score 1991 entry. It showcases him making a quick, low to the ground cut. He had a lot of power in a small package, and was likened to a pinball due to Ricky’s strong sense of balance and ability to bounce off of tacklers and stay upright.  Ervin’s Pro Set entry was sort of a gimme- since the company still had some really exceptional action shots. This one was from a preseason game against the Pittsburgh Steelers. Score’s Supplemental set photo was equally as good, with him charging forward, in the shadow of his own endzone. Although his football career was punctuated by injury, Ervin’s short time in the league saw some great highlights, including helping the Redskins win SuperBowl XXVI. He runs Xtreme Xplosion, a sports facility in Fairfax, VA that focuses adult and youth players on guided training, and improving  conditioning,  speed, strength and agility.