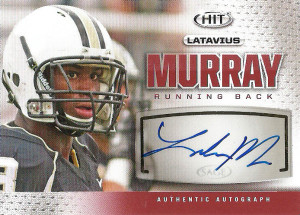 Latavius Murray is a prospect as intriguing as his name suggests. At 6’3″, 230, he can run the 40 4.38 seconds but he tumbled to the 6th round of the 2013 draft.  Due to a perceived lack of experience, Tay Train rarely saw the ball, carrying a grand total of 307 times, thanks in part to the presence of UCF quarterback Blake Bortles, who rightfully saw the bulk of the action. In his senior season Murray finished with 1,106 rushing yards and 19 total touchdowns.

His rookie season in 2013 ultimately ended in disappointment as injuries sidelined him for the majority of the year. He was then buried on the depth chart behind Maurice Jones-Drew and Darren McFadden. It’d be in week 11 that Murray finally got his chance to shine on the NFL stage. He finished the 2014 season with 82 carries for 424 yards (5.2 ypc) and 2 TDs.

Latavius was considered a sleeper pick in many fantasy leagues entering the 2015 season. I attempted to snag him in my league fantasy draft but missed out by two picks. He ended up having a solid campaign, rushing for over a 1,000 yards to go along with, 6 TDs, and 42 receptions.  His best game came against the New York Jets in which he rushed for 113 yards on 20 carries, to pace the Raiders to a 34-20 victory.