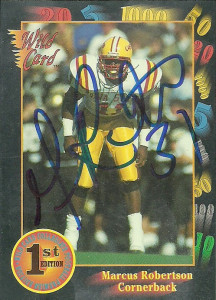 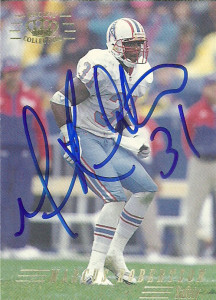 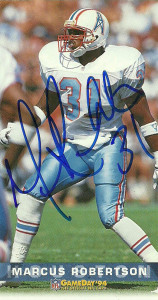 A dynamic defensive back who changed the Houston Oilers secondary when he became a fixture in 1993, Marcus Robertson was a mystery at the Anniversary Party. One of the guys who was with me got his autograph on a helmet and I immediately recognized his unique signature.  Marcus was very impressed by this Wild Card 1991 card of him. He made sure to show it to all his friends and teammates. Marcus was all smiles and thanked me for being a fan and sticking through it with the Oilers all those years. 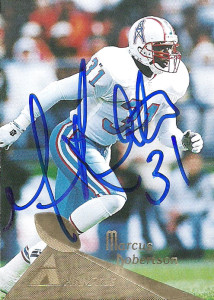 Pretty much ugly cards all around here.  The Pinnacle entry is just… all the worst combined into one card. A horrible font that’s barely readable in gold and then a really bad card back that is just too busy. It’s just impossible to read anything. GameDay continued its slow and minimal evolution into nothingness and by 1995 the brand had been completely reabsorbed into Fleer. Sure, I appreciated the tall boy entry as some of their sets are my favorites, but this one was almost too simple.

I found out about this event through Texas Autograph Club. While there was a person kind enough to put event information up there, when I asked for more information about the event, one of the regulars decided to belittle me, and tell me to do the work myself if I wanted to know. It really turned me off the site, because it was just a simple question. 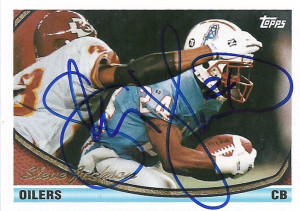 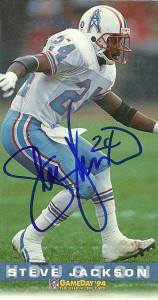 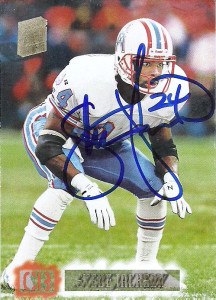 The Houston Oilers drafted  Kevin Donnalley in the 3rd round of the 1991 draft. The team liked his size and versatility, where he joined fellow rookie John Flannery on the line. A prized drive blocker, Donnalley’s scouting report notes his great size, frame, and a good understanding of blocking angles and techniques. The Oilers felt that Kevin’s work ethic obviously outweighed his lack of experience and questions about his upper body strength. In the meantime the team felt they could groom him at tackle behind Don Maggs.

After starting inside at guard due to injuries decimating the line, Donnalley shifted outside to LT for the 1993 season, starting 6 contests. In 1994, Kevin was moved to right guard, – the position he’d play for the remainder of his time in the league.  Offensive systems and coaches changed, and even though the team went through salary cap hell in 1994, Donnalley remained with the franchise through 1996 and its departure to Tennessee, playing with the Tennessee Oilers through 1997. He’d sign as a free agent with the Miami Dolphins in 1998, and later the Carolina Panthers in 2001.

It’d be with the Panthers that Donnalley probably is remembered best, paving the way for Stephen Davis at running back and blocking for quarterback Jake Delhome, during the team’s Super Bowl run in 2003, setting franchise records for fewest sacks allowed and total team rushing yards. After the Panthers improbable run, Donnalley retired, stating simply that, “I’m very tired” in 2004.

Kevin has been involved in coaching, public speaking, and spends time working for charities and foundations. A reliable signer, he signed these 3 cards in under a month’s time. The 1991 draft turned out to be a solid one for the Oilers as they were able to nab a lot of depth and future starters. It’s a shame that they had rolled against the salary cap, evidenced as many of their key players such as Kevin, departed to greater glory in other places.