Bill Bradley signed my custom card of him, and also sent back the extra with more inscriptions upon it. A solid return, he wrote me a nice note with a full page of additional inscriptions and thanked me for being a fan and putting this website together with my shrines to the multiple leagues.

I hadn’t seen Bill since he appeared in Austin for the Upper Deck set signing back in 2011. In the meantime, while he was coaching at Lamar (2012-2014) I found this Upper Deck Legends card I really wanted to get him on, but I opted not to try him through the mail yet.

Time passed, and in 2018- after much deliberation, the Alliance of American Football established their last franchise in San Antonio. I quickly speculated that the team was going to nab Mike Riley as their head coach. While at the Season Ticket Holders Team Announcement Party, Mike let me in on a little secret since he knew I was a San Antonio Riders fan- he was courting Bill to come back and work for him on the Commanders defense as a defensive secondary coach!

Bill’s secondary in the AAF was an exciting unit to watch and led the league in turnovers. His coaching legacy now also includes the AAF Defensive Player of the Year Derron Smith, and a bevvy of players who were signed to NFL, Arena, and XFL rosters.

Andre sure got in a lot of great cards in his short amount of time on the starting stage in the NFL. Even after this third stab at a few more autographs, there are a few more cards I could probably nab him on.

I loved Action Packed and GameDay’s sets. Action Packed 1991 was a pretty well designed set, with that simple swoosh that goes through the left side of the image- it maximized the canvas area to focus on the player image. I also really liked the flat helmet image at the end. It’s a really underrated set, and despite the slight smudging is great to get autographed. Most of the images are indeed- action packed. This Gameday image is really nice, however one of the set’s design flaws comes forward a bit when the silver blends against the gray, the image looks a bit more flat. The Fleer 90 card was one of 4 (technically) that had a college photo of Andre in it. (The others being Topps, ProSet, and Score.) We always laughed at the fact that Fleer didn’t find a shot of Andre actually throwing the ball- but instead chose to get a shot of him pitching the ball out. All of these cards were distant set needs for me in my never ending autograph quest.

About the time that Coronavirus broke loose and some stay at home notices were put into place, Andre started signing his TTM mail after a 5-6 year absence from the game. He was initially playing catchup and then started signing some newer requests. I always liked Andre, and I hadn’t TTMed him since 2012, I decided he was ripe for the picking.

As of 2020, Ware remains the steady voice as the color commentator for the Houston Texans game day radio show. 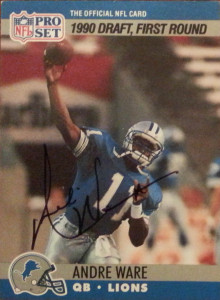 Lance and I arrived at the 2015 Houston Texans Draft Party with high hopes, but were ultimately disappointed when we didn’t have cards of the Ambassadors who showed up, and the players I did have a card of were only taking photo ops. Queue the Astrodome air raid siren, because Andre Ware came to the rescue.

As Lance and I made our way towards the photo op booth, I heard a familiar voice on TV. Andre Ware was being interviewed on Fox Spots Southwest. Recognizing that the broadcast was taking place in the stadium, I walked over to one of the people working at the stadium and asked them where Andre was. The stadium employees identified it as being at radio row where only the VIP fans were allowed. We got as close as the elevator, and after borrowing a pen and waiting for about 15 minutes, Lance and I decided to locate the ground floor exit of the VIP area to get a better vantage point.  We walked for about 5 minutes, and emerging out of the crowd from the other direction, was 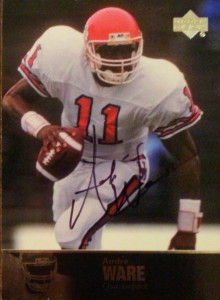 Andre Ware. Kudos to Andre for cheerfully signing 2 cards for me and Lance, even though he had his hands full with two kids by his side and all their stuff.

I can’t encourage collectors enough to build out a compact and expanded box of cards that covers the full gamut of players, former players, and sports personalities. With Andre covering the Texans on the radio as a color commentator and also being  a local legend, it made sense to have a few extras on the off chance he did make an appearance.  Otherwise  these are great cards of Ware, and leaves me with only a handful of extras that I would love to have autographed for my collection.