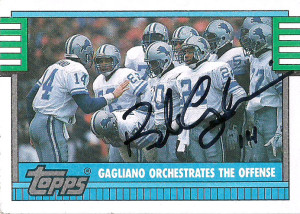 The Goose, as Gagliano is affectionately known by the Detroit Lions, earned his nickname during the team’s late season surge in 1989 under head coach Wayne Fontes. The Lions were bad – very bad, and the 1989 season started out like any other with 1 win in 9 games, but things changed in week 10.  The team rallied and won 6 of their next 7 contests. Gagliano was a big part of that going 4-3 as a starter, replacing the oft injured Rodney Peete. Sure his numbers were not all that sexy, throwing twice as much interceptions as touchdowns in the Silver Stretch Offense of the Run ‘N Shoot. When Gagliano was on though, the Lions won in exciting fashion, but when he wasn’t Bob failed to post above a 60 QB rating. 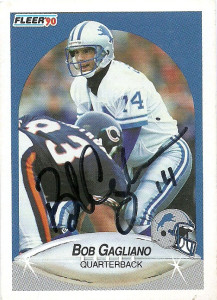 In 1990, Bob continued to battle Peete at quarterback for the starting job, frequently coming in as a change of pace. He’d start 9 games that season and throw for a career high 10 touchdowns. Gagliano was allowed to sign via free agency with the Chargers in 1991, starting game in 1992.  For the next three seasons Bob served as an insurance policy for the Falcons (1993), 49ers (1994) and Packers (1995). 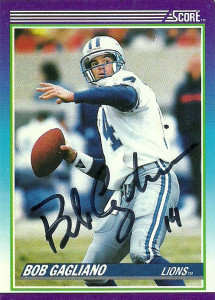 Before the Goose’s time in Detroit, he was originally a 12th round pick of the Kansas City Chiefs in 1982. After getting no traction on the roster through 2 seasons, He then played for the rival USFL Denver Gold in 1984 and 1985. Gagliano returned to the NFL in 1986. He was signed by the San Fransisco 49ers and started one game as a scab player.  In 1988 he also spent time on the rosters of the Houston Oilers and Indianapolis Colts.

Bob Gagliano is a great piece of NFL trivia.  He is one of only three starting quarterbacks to play for the San Fransisco 49ers during the 1980s- alongside Joe Montana and Steve Young.  That’s some great company to be in!