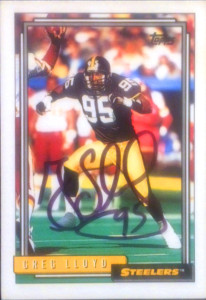 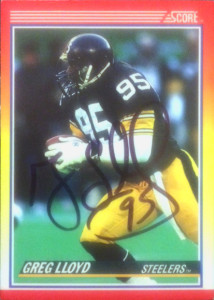 Greg must have liked the Action Packed and Skybox cards I sent him, because he switched them out for these cards-  not that I am totally complaining. I was happy to get back these two anyway since it took over 2 years.

Greg Lloyd was another one of these sneaky defensive prospects who went to Fort Valley State.  A 3rd round pick of the Pittsburgh Steelers in 1987, Lloyd lost his entire rookie season after a devastating knee injury. It was so bad, he took the field for only 9 games (starting 4) in 1988.  In 1989 he was entrenched as a starter at right outside linebacker. A well balanced defender, Lloyd could tackle, blitz, or cover a receiver out of the backfield- evidenced by his 92 tackles, 7 sacks, and 3 interceptions. He continued to build a head of steam through his career, beginning in 1991, when he earned his first ProBowl honor with 76 tackles, 8 sacks, and a whopping 6 forced fumbles.

In 1993 former LA Ram Kevin Greene joined the Steelers, turning the Pittsburgh defense into Blitzburgh. Greene ran rampant on opposing team’s defenses, thanks to Lloyd who had to always be accounted for. Greg earned his first AP nomination after the season, a year in which he had a career high 111 tackles, to go along with 5 FF and 6 sacks. Greg got the nod again in 1994, when he had a career high 10 sacks, and finally in 1995, when he accounted for 3 intereceptions and 88 tackles.  He tore his patella in the season opener against the Jags in 1996- ending his season.  In 1997 he returned to form but suffered a serious ankle injury that turned into a staph infection- essentially ending his career as a Steeler.  He finished his career playing for the Panthers in 1998 adding another 48 tackles and a sack to his impressive resume.  A Pittsburgh legend, and an intense competitor, Greg has a black belt in Tae Kwon Do, and loves to teach the martial discipline. I used to go to training camp for the Cowboys way back when they were in Austin. On one of the first days that I was there I got Daryl Johnston on his Topps 1990 rookie card.

A few years later I got the Topps 1992 and this Playoff 1992 card. I took them both to training camp with me, but never was able to get Johnston again. I don’t know whether or not he recognized me as a regular at camp, or that the Cowboys were too big for their britches and didn’t sign anymore, but he went from being a stellar in person signer to the classic ignorer, within 2 years. Part of me didn’t blame him if that was the case. The fences at training camp were a difficult to navigate with the throngs of fans who wanted autographs. Not to mention there were a lot of kids running over to the local card shop and selling all those autographs right afterwards.

Needless to say it’s great to see that Johnston is a pretty good signer TTM. When I uncovered this Upper Deck Legends card recently I went ahead and shot out these cards to him.

All of these are great cards of Daryl. Once the card companies got wind of his popularity, solid play, and the Cowboys rise to prominence again, he became a regular in most of the card sets. He has a beautiful autograph, with a solid, encapsulating loop on the ‘J’.

Johnston is not a member of the NFL concussion litigation group. He instead is an advocate of proactive brain testing for players.