Sorry this post is going to be different. It’s going off the rails a bit from the usual player biography.

Today we’re going to talk about when paid signings go bad, because I was the recipient of one. I had been after Jermaine Lewis for years, but being a terrible TTM signer, I decided to wait since I wanted him on a sorta rare Texans Inaugural Set card.

After missing out on a signing on a budget for Lewis earlier this year, I was super happy to find an affordable one going on in early November through IPO Sports Marketing. I put my card in the mail and patiently waited. The trade was accepted on October 31st. The event was scheduled for 11/14, but later on I discovered that he hadn’t updated his SCN offer to match his flyer, which said November 21st!) On December 1st I emailed the guy and asked him about the event. He did not respond. The next day I received my card back, with this additional random Topps card signed, and a note stating, “No Texans cards. Sorry.” -That’s it.

I emailed IPO Sports Marketing that day on December 2nd telling him that what I received was unacceptable and that I would like a full refund. I got no response.

I checked my SCN outbox on December 4th and noted that he had not opened any of my emails, so I decided to escalate the situation through Paypal and leave negative feedback through SCN where the trade was facilitated. -I had been more than patient with IPO Sports Marketing, and now it was taking too much of my time.

An hour or two later, I got an email from Paypal indicating my refund. Then shortly afterwards IPO Sports Marketing put my SCN email on blitz. He responded first to my email on 12/1 about where my cards were with a tirade:

I was not aware that he did not sign Houston cards til signing. I tried to give you a free card and refund. But you gave a negative?? Insane. We have had countless signings this and last month. Now you to will receive a negative. I have lost a childhood friend to Covid. But hey your card is more important!

Ok let me lay this out since he subsequently blocked me:

a. If he wasn’t aware that Lewis didn’t sign Houston cards, why didn’t he contact me over the next two weeks after the signing to let me know?

b. He sent me that autographed card, but did not tell me I’d be issued a refund, nor did he do it until I requested one.

c. Yes I patiently waited for his service that he did not fulfil correctly or with customer service.

d. I don’t care if he had countless signings. – This is called an ‘argument by authority.’ I can easily say that I have gone to HUNDREDS of in person signings, but does that give me any credo: Nooo.

f. Sorry, I didn’t know he lost somebody to COVID. -That’s his personal business though and isn’t material to the transaction.

g. My card is important to me. -Why is he belittling me for his failure? Maybe he’s really only interested in the big fish that he’s cooking and not little guys like me? I mean just says more about him.

His next email was one telling me to be patient and they’d offer me a refund AFTER I got the card in the mail. The problem was the email he responded to was the email that I told him that I had already received the card and it was not acceptable from 12/2.

His last email was notification of the negative feedback he left me, where he claims to have offered me a free card and a full refund- and that I am just a crazy person.

So I immediately contacted the admins at SCN, and after investigating they removed his retaliatory feedback (not to mention it is clearly stated not to do it in the rules). IPO Sports Marketing attempted to explain a revisionist history of the situation, trying to make it sound like they had offered me the card for free and a refund and that I was just a crazy person who ran off and hammered them with Paypal and negative feedback.

Now why would I do that when I just want my autographed card? Why would I create unnecessary drama for myself like that? This has happened to me in the past, and you know how the seller handled it with me? COMMUNICATION. And you know what I did? – I didn’t leave negative feedback. That’s for sure. (What IPO Sports Marketing failed to understand as a retailer is with every customer service mistake, there’s an opportunity to fix and an opportunity to make another sale- but he didn’t.)

All he had to do was say, “Hey couldn’t get this done. I’m so sorry. Here’s a free autographed card. I’ve already refunded you your money (and gone through with it).” That’s the tragedy of it. It became a mountain for me to stand on because he refused to deal with the mole hill in front of him.

I do not take negative reviews lightly and I do not like issuing them whether its SCN or EBay or whatever. I am exceedingly patient, so when I decide I am unhappy with a service, it is not done lightly. It is done after methodical documentation and an opportunity at every corner to give the retailer a chance to communicate with me or make me whole.

Thankfully with the available time date stamps from the emails that I received from both my personal email and SCN, I was able to compose a timeline for them to review, so they could understand that his timeline of events was not accurate. My negative feedback was accurate to the situation and the moment, but after this happened, I felt I should write about it, so others would be aware that there are bad signing situations that happen.

Later that week, a Ravens fan posted all his Jermaine Lewis autographs that he obtained from that signing. Curiously, he included 3 signed Texans cards that Lewis had penned. What took the cake later, was one of my friends also experienced a similar situation with the IPO Sports Marketing. IPO offered to send him any Jermaine Lewis autograph that he had- and sent a photo grouping of all the cards, and among them again was another Jermaine Lewis Houston Texans card.

Why would IPO Sports do this to me? Coupled with my friend’s issue, I am led to believe that IPO Sports forgot to get our cards signed, then sloppily tried to cover it up.

There are a lot of people out there who shouldn’t be handling signings (especially now during the days of COVID). There are people who don’t understand customer service, who are overwhelmed by their own lives, problems, or underlying issues that they didn’t understand about handling autograph signings.

Be patient with them. Go easy on them, but don’t let them gaslight you when it is their fault. Tolerate to a point and don’t be afraid to hold them accountable when you’ve been more than reasonable and had enough.

That being said I’ll wait until some other time to write about Jermaine, when I have another autograph in hand of his on his Texans card. In the meantime, and I say this with conviction: Beware about doing business with IPO Sports Marketing. 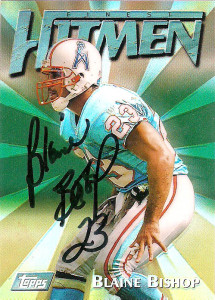 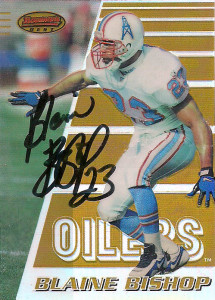 During the mid-90s, Blaine Bishop was one of the best strong safeties in the NFL. While his interceptions didn’t show it, he certainly made up for it with his ability to enforce at the line of scrimmage and nose for the ball in the box.

Blaine was drafted in the 8th and final round of the 1993 draft. A surprisingly deep draft, 6 players drafted in Round 8 made the ProBowl in their careers- more than any other round in that draft except for Round 1 (7) or Round 2 (also 6). Bishop was to provide depth for talented Houston Oilers secondary that already included Cris Dishman, Darryll Lewis, Mike Dumas, Steve Jackson, Marcus Robertson, Bo Orlando, and Bubba McDowell.  Bishop beat out former second round pick Mike Dumas and join the Oilers roster that season starting 2 games for the team. As the team imploded in 1994 with the implementation of the salary cap, Coach Jack Pardee resigned under fire. Defensive coordinator Jeff Fisher took over, and Bishop saw a more important role in the defense starting 13 games that season.  From 1995-1997 Blaine earned 3 Pro Bowl appearances, and joined the team when it commuted to Tennessee in 1997. He’d earn another Pro Bowl appearance in 2000, but an injury shortened 2001 ended any hopes of a repeat.  In 2002, Blaine played one final season with the Philadelphia Eagles.

Blaine, as of 2015, lives in the Nashville area where he does radio and sports commentary. One of the last connections to the Houston Oilers, I had been looking for a few cards for sometime that represented Blaine. Topps really upped their game with foil quality cards and the Hitmen series in the mid-90s have been some of my favorites from their collection.