Jeff Hostetler played football collegiality in 1979 and 1980 for the Penn State Nittany Lions. There he posted 319 yards on 24 of 59 passing throwing 1 TD to 2 interceptions but was beat out by future first round pick Todd Blackledge to the starting quarterback job. He’d transfer to West Viginia in 1982 and work his way into Mountaineer lore. He’d throw for 1798 yards and 10 TDs in 1982, and then 2247 yards and 14 TDs in 1983. Although not a gifted scrambler Jeff was solid out of play action and had a solid arm to boot. He’d be selected by the New York Giants in the 3rd round of the 84 draft.

Thanks in part to Phil Simms durability, Jeff pretty much never saw the field for the first 5 seasons of his career (outside of special teams). – Not to mention the fact that he was 3rd string. He saw his first action in 1988, with some mop up duty and then later starting in a win over the Saints. While his numbers on the season weren’t amazing , Hoss showed enough promise that he took over the primary backup role for Phil in 1989. He saw some starting duty again that season, as the Giants made the playoffs, but were bounced by the LA Rams.

The Giants came back the next season (1990) and were firing on all cylinders towards the playoffs, but in the 14th contest of the season, Phil went down with a season ending foot injury. Hoss came in, and although they lost the game, he guided them to a win in their next two contests to finish 13-3 on the year and into the playoffs. The Giants used a ball control offense to pummel the Bears 31-3, squeak by the 49ers dynasty 15-13, and into Super Bowl XXV.

Considered by myself to be one of the finest Super Bowls ever, the Giants ground out a 20-19 win over the Buffalo Bills. Jeff himself completed 20 of 32 passes for 222 yards and a TD in New York’s win.

After the win head coach Bill Parcells retired suddenly. His replacement Ray Handley announced a quarterback competition between Hostetler and Simms before the 1991 season. Surprising many, Hoss won the competition, but suffered a season ending injury during the 12th game of the year. The following season- again- Handley announced a quarterback competition. This time Simms won but got injured only after 4 starts. Hostetler came in and played well but also suffered an injury as well. Hoss’ time was up in New York after the season. He’ sign with the Los Angeles Raiders in 1993.

As the unquestioned starting quarterback for the Los Angeles Raiders, Hostetler led the Raiders to 10 wins, and threw for a then career highs in almost all categories (236/419, 3242 yards and 14 TDs). The following year in 1994, he’d again set career highs with attempts (455), completions (263), yards (3334), and TDs (20)- earning his first and only Pro Bowl appearance. Jeff transitioned with the Raiders to Oakland in 1995, and although he did throw for 23 TDs in 1996, injuries kept adding extra wear to the grizzled veteran. He signed with the Redskins in 1997, and returned to the role of clutch backup quarterback, retiring after the 1998 season.

Jeff has his own charity- The Hoss Foundation, and after failing on him during my first attempt in 2012, even though I sent a donation, I sort of was so stung by it time just flew by until I got back around to him again in 2018.

His heroics in Super Bowl XXV still stick out in my mind, and this beautiful Action Packed 1991 card frames it so well. Jeff’s autograph isn’t bad either with the way the ‘J’ crosses the ‘H’ it definitely feels like a real autograph. In 2019, Jeff was named to the preliminary anniversary list of nominees for the Pro Football Hall of Fame Centennial Anniversary. 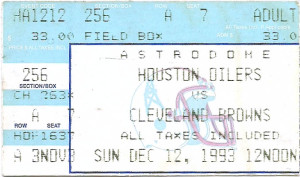