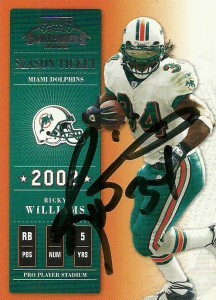 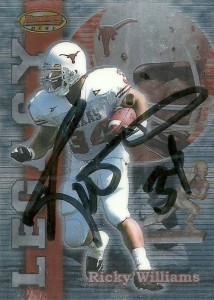 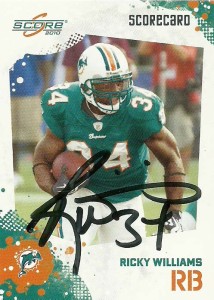 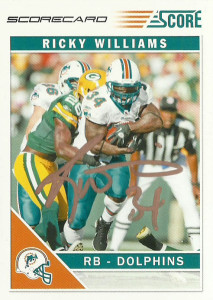 Ricky again continues to be one of my favorite in person players to meet.  I always introduce 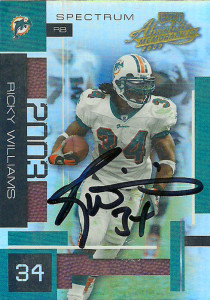 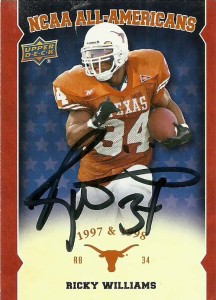 to him by my first name and then  get bashful because whenever he sees me, he smiles and says, “I know you. I see you everywhere.”  It means a lot that a player takes the time out of his day to do the little things such
as that (and it’s not in a negative tone either). Recently he started offering concussion therapy alternatives for former players- all for free, really underlining his commitment to helping and healing others. He’s done a lot of motivational and public speaking as of late, and has gotten his Masters from the University of Texas. 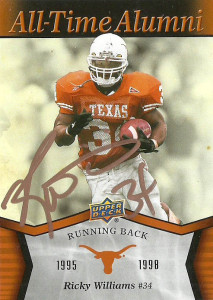 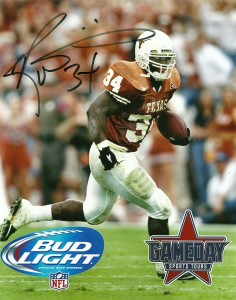 all he had gone through.
Every time I think I have finished getting Ricky’s autograph, I find 6 more cards I like. That’s the dilemma of being a collector sometimes. It can be difficult to draw the line and find where to stop. For me, I really covet card design, but I also am fascinated by the autograph when it seals the deal and the memory.  -This leads to infinite possibilities and endings. I’ve been asked before: “What do you do with so many autographs of one guy?” My general feeling is that I honor their contribution to a very violent and punishing
sport by remembering them. 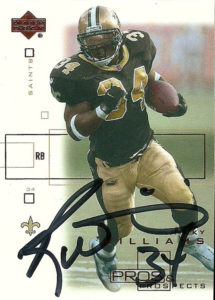 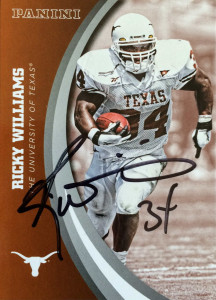 I arrived early for the Anheuser-Busch Gameday signing figuring that an hour and a half would be enough time to secure a decent spot in line. It was Ricky Williams of course. When I arrived, I was surprised to find that not only were there no fans waiting, most of the staff at the local HEB did not know Ricky was coming. After being directed to the toiletries line to start my creepy, lonely one man line, I waited patiently while everybody set up.
A few people skipped me in line, which was okay. How were they supposed to know I was the front of the line?  It was no skin off my
nose. When I did get up to Ricky, we talked a bit 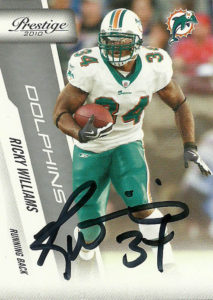 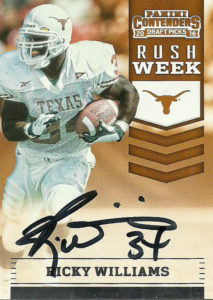 about his concussion therapy and I asked him to sign a few cards. I unabashedly packed 7 cards. Some fans frown upon this behavior, but I have no problem if he decides to stop at 2. It’s really up to him.
Ricky jumped right in and signed away. It was then that the handler representative from Anheuser or Gameday jumped in and told me that there was a limit of two autographs per
person. I’d swear, Ricky heard him and didn’t care. He just kept signing. The handler then said okay that’s the last one, and Ricky signed one more card and photo for me and bid me a smiling farewell. The total at that point was 3 and a 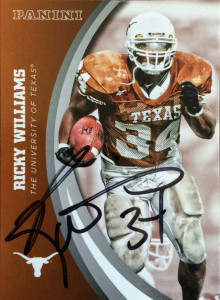 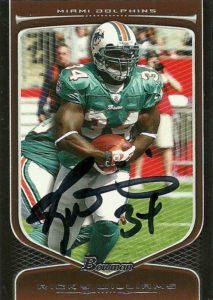 signed photo.
The policy really didn’t make any sense to me because there was nobody in the line, Ricky and I sorta knew each other, they didn’t put limits on the previous stops, and in an asinine
way what was to stop me from just showing up at the next location and getting two more? Still I respect that since it was a free event.

A childhood friend of mine worked right around the corner. He is also an avid collector and fan of the sport and wanted to get a photo and autograph with Ricky, so I agreed to give him one of my extras if he came up there. Not only did he get his photo, he got all the additional cards signed and gave them to me.  As thanks I let him have one of his choice for his own personal collection. 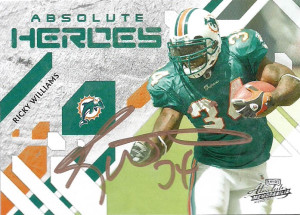 I went to the Town North Nissan signing in December. It was a surprisingly short line, and the car dealership wasn’t data mining or requiring test drives of fans. I was actually taken aback because there were employees of the store in line, and they were brazenly talking about selling extra footballs.
When I got to the front, Ricky asked me where he knew me from because he’s seen me so often.  I told him that the Town North area 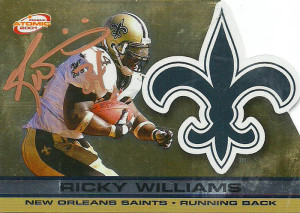 used to be my ‘hood’ and that I had seen him at the HEB event when we talked about concussions.  I then explained my modus operandi to him- and how I just have all these cards of him, sitting around doing nothing. I might as well get them signed. There’s just something about the autograph on the card that’s addicting and creates new memories out of them. I admitted as much that it possibly might seem weird, but he was 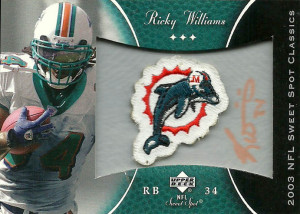 very cool about it. Even more comforting was the BAM promoter, who sees me everywhere, didn’t give me the evil eye (like I think he does). In fact he was really, really nice to me. I mean maybe that’s what it took for him to understand how harmless I am, but I digress. Ricky and I talked again about concussions, places he’s traveled to and Tien Tan Buddha. He promised to remember who I was for next time. 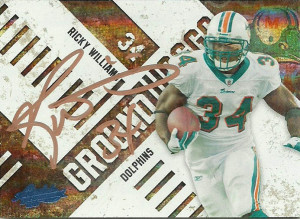 I met up with Shawn at the Wag-A-Bag for the Ricky Williams Signing in January of 2016. It was a large location, but jam packed with aisles and aisles of stuff, so it was hard to navigate.  When I got to Ricky, he smiled and said hello. I wanted to prove to him that I was
a collector, so I had packed all my autographs in a binder to show him. Before I could finish explaining that I had brought them and he could sign what he wanted- Ricky told me he’d 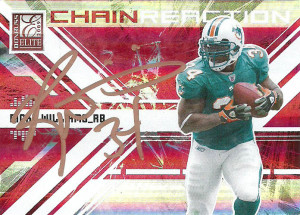 sign them all without batting an eye. He told me that when he was a kid, the Chargers and Raiders were his favorite teams, but definitely not the Rams. He really liked the Crown Royale patch card of him from his Saints days, and pointed out how he was squaring his
shoulders. He also thought the Upper Deck Dolphins 2003 Sweet Spot was cool looking. He thought his Score 2011 was also worth mentioning, and joked with me that he thought 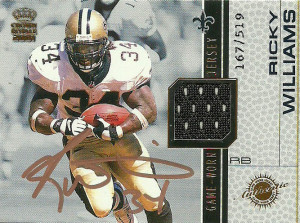 the would be tackler was racking his balls.  Williams also was very proud of his cards from his playing days in Baltimore. By that point he had finished signing all eight cards that I had brought, and I wished him well and went on my way.

At the 34 Wine and Spirits the gatekeeper blocked me, but Ricky stepped in. Ricky said,  “It’s okay. He’s my bud.” Ricky signed

everything on me again. (This time it was only 4 cards.) We talked about travel, and that Hong Kong was on his bucket list. He asked
about the weather, and lamented about how he was not able to make it down there this last time he was in China. We then talked about collecting and how I store all my autographs in binders. The reason I do so is because if I did anything else or it took up more room in the house, my wife would kill 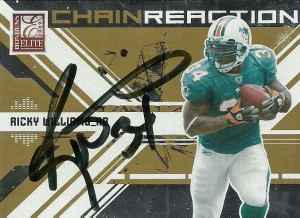 me.  We discussed the merits of the Panini UT  2015 set vs the Upper Deck UT 2011 sets of cards. I objected to the high amount of ‘filler’ cards. You know, cards that nobody cares about like, here’s the UT Swimming Pool and here’s something that just says Austin on the front. We also talked at length about my history in collecting. 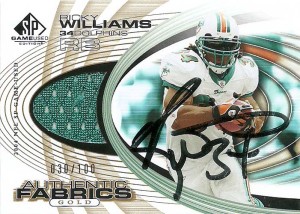 Again later in the year at the season opener against Notre Dame, I got Ricky’s autograph on a few more cards during the Heisman House Tour. He hadn’t seen his Panini Contenders 2016 Rush Week  card, and asked me where I got it. It was pretty obvious how much he liked it. Ricky has become a spokesperson for the responsible usage of marijuana. He’s been in the news for saying that if marijuana was legal he would be in the Pro Football HoF today. As controversial as 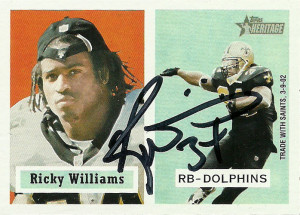 this sounds: I completely agree with him. As the era of the bell-cow back is now coming to a close, Ricky was leaned heavily upon by the New Orleans Saints and the Miami Dolphins.  A career member of the 10,000 yard club, that led the league in carries 2 years in a row (with backbreaking 380+ carry seasons),  I think Williams could have possibly eclipsed the NFL rushing record or TD record if not for suspensions/retirement. Making the simple calculation of taking his career game average of 61.9 and multiplying that times 16 gives us a stat of 1,089 yards. Plug those modest numbers in for the two seasons he was away from the game and the 2007 campaign, and he’s got well over 12,000 yards. Now if we are even more generous and calculate out the numbers based on his first 5 seasons before his impromptu retirement, Ricky had a game average of 79.425, which would push his season average to roughly 1,274 yards. Considering Ricky was the focal point of the Dolphin attack, we add in well over 3,000 yards to his 10,009 career yards on those missed seasons.  This would place him in line with other hall of fame enshrinees such as LaDanian Tomlinson, Eric Dickerson, and Jerome Bettis.

The other thing you have to consider is the toll that the carries were taking on his body and the way it has on other runningbacks in NFL history.  While his methods and reasons at the time were frowned upon, the concept of using marijuana to treat ailments has been documented extensively for many years. No I am not attempting to get into a philosophical discussion about the value and uses of drugs, however I think that the whole situation contributes as a whole to the general perception and misunderstanding of Ricky Williams and the unique legacy that he has left upon the league, with the media, and in the hearts and minds of fans.

Ricky has been a social advocate and businessman for responsible marijuana usage. It’s tough to be taken seriously especially when it comes to a drug such as marijuana that has such an association to being a slacker, but Ricky takes it all very seriously. I think he’s approaching the whole issue the right way. He and I had a short discussion about it, and I was surprised that he jumped so quickly towards approaching and introducing the issue to the general public, with patience, respect, and ease.