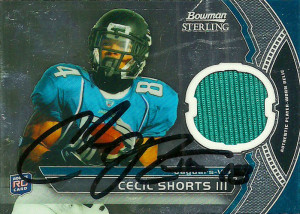 Cecil Shorts went to Mount Union- located in Alliance, Ohio. The Purple Raiders are a Division III team and a member of the Ohio Athletic Conference. Among the other notable alumni to graduate from Mount Union, are Dom Capers and Pierre Garçon.  After  Garçon graduated in 2008, Shorts shifted from quarterback to wide receiver. He finished his career at Mount Union with 63 touchdowns and 4,705 yards receiving.

Cecil was selected by the Jacksonville Jaguars with the 114th pick of the 2011 NFL Draft. Scouts got the impression that Shorts’ early on experience at quarterback helped him adjust quickly to receiver, reading opposing defenses, and running crisp routes.  They were equally impressed by his intangibles, level of competition, and his
leadership. The knock on Cecil was he played at DIII, and while he is a complete receiver -he lacked the size and burst that first round prospects possessed. It wasn’t until 2012 that Cecil got a shot at the starting lineup as Blaine Gabbert’s #1 target.  Barely missing the 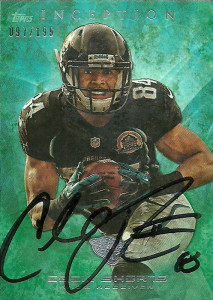 1,000 yard mark (979 yards), Shorts established himself as a long bomb threat. He scored 7 TDs that year and averaged 17.8 yards per catch. Over the next two years Cecil’s production slipped and after the 2014 season he was allowed to seek free agency.

After the departure of longtime receiver Andre Johnson, the Texans were looking to rebuild their wide receiver stable and signed Cecil to a two year contract.  Shorts makes a natural fit for what the Texans want to do, and threw him in at the slot. He made an impact during the preseason catching a 58 yard TD against the 49ers, and was one of the team’s impact players.  In 2015 Shorts played in 11 games, recording  42 catches for 484 yards and 2 TDs.  Entering 2016 Cecil is the ‘grizzled’ veteran now in the WR corps entering only his 6th season. Liking what he has experienced in H-town, Shorts actually negotiated his contract to be more cap friendly but with so much speed on the Texans roster he didn’t make the 2016 squad. Although his veteran presence and leadership will be missed, Shorts will surely find a home with a squad in need of an experienced slot man.

I faced a dilemma at this event trying to decide which card of Shorts I should get signed at this event. The situation resolved itself quickly since I was the first person in line and Shorts was the first player I met. He signed both cards for me, and his son gushed over his Topps Inception card, that I was equally enthralled by.