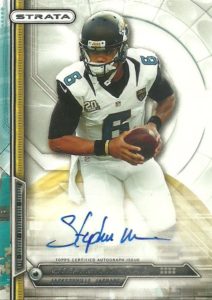 Stephen Morris played college ball at Miami (FL).  Over his college career from 2010-2013 he posted 7896 yards and 49 TDs to 30 interceptions. He was not selected in the 2014 NFL Draft, but signed a free agent contract with the Jacksonville Jaguars. For pretty much the entirety of his career he’s been relegated to the practice squad or 3rd string quarterback and while his body of preseason work has improved over the year, he has never attempted an NFL pass.

After a little over a season in Jacksonville Morris was waived in 2015. He signed with the Philadelphia Eagles and was added to their practice squad. The Colts claimed him right before Christmas and added Stephen to their active roster. With Andrew Luck ailing Morris stood a decent chance of making the team- and while he had a more impressive preseason than fellow QB Scott Tolzien, Morris was inexplicably cut before the season began.

After a year away from the NFL, Morris was signed and cut by no less than 3 teams during the 2017 off-season including the Redskins and Seahawks. On the same day as this posting, Morris was claimed off of waivers by the Houston Texans.