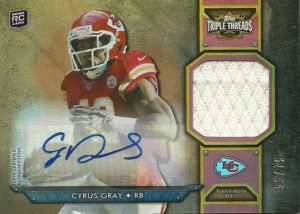 He played from 2012 to 2014 for the Chiefs. With an already established backfield led by Jamaal Charles, Cyrus did not see the rock much.  He scored his first NFL touchdown in week 3 against the Miami Dolphins, but tore his ACL late in the season.  He was not retained by the franchise. Cyrus finished his 3 years in KC with 24 carries for 99 yards and a TD. He also caught 9 balls for 64 yards.

In 2016 he spent time on both the preseason rosters of both the Broncos and the Falcons- with the latter giving him an injury settlement. As of 2017 he is a free agent.