A walk on at Indiana, Collin Taylor started out as a wide receiver but was converted to free safety during his junior season.  He made his biggest impact on special teams and was named the IU special team’s player of the week 10 times while appearing in 27 games.  Collin was also Indiana’s nominee for the 2009 Rudy Award, honoring Division I football players who demonstrate the exemplary values of inspirational football legend Daniel ‘Rudy’ Ruettiger.  He had an OK pro day at Indiana, but was not invited to the combine for the 2010 NFL draft.

Taylor has seen some serious playing time in the indoor leagues since making his debut in 2010 with the Oklahoma City Yard Dogs. Orignally slated at safety, he had an interception for a touchdown in his only appearance. He then played for the Tulsa Talons (2010) where they allowed Taylor to shift back to his natural position of wide receiver.  He later spent time with the Reading Express (2011), and the Iowa Barnstormers in 2012-2013, before becoming an integral part of the Cleveland Gladiator offense in 2014.

Collin along with a host of other Gladiators came signed to me care of a friend of mine who loves collecting my custom cards. They went over quite well with the players, but I was not able to make any more traction with the league on a contract. Jamar Ransom was the heart and soul of the Talons defense going all the way back to the franchise’s day as the Tulsa Talons, where he was a member of the Talons 2007 AF2 Championship squad. As the ‘Jim’ linebacker, Jamar has recorded at least 50 tackles in each season since the team joined the AFL back in 2010, and over his first three seasons, he was also utilized as a fullback, adding  24 rushes and 11 touchdowns to his name.  To top things off, Jamar’s been involved in causing 20 turnovers in 4 seasons. Ransom’s best season came in 2013, when he recorded 70 tackles, 2.5 sacks, 10 pass blocks, 2 forced fumbles, and 7 interceptions for 76 yards and count ’em- 3 touchdowns, earning him AFL first team honors. He garnered quite a reputation around the league as a punishing enforcer with a hard hitting and relentless style of play.  The Talons in turn promoted him as their defensive leader with jersey sales.

Ransom had been a dodgy guy for me to track down. Jamar not only skipped the season ticket holder event- he wasn’t even available for the Talons game against the Barnstormers. Luckily after the game against the Voodoo, I tracked him to the autograph tables and pushed my way into him. When I gave him his card, Jamar was absolutely estatic. He told me that he had never had his own card before, and clasped the two cards I had created of him as though they were a cherished toy of his. He gleefully signed the two cards for me and it was very obvious I had made Jamar’s day. It is moments like those that I truly cherish. Jamar later got in contact with me asking for a few new customs. I speced out some ideas, but I did not hear back from him.  The Talons in the meantime went on hiatus for 2015. 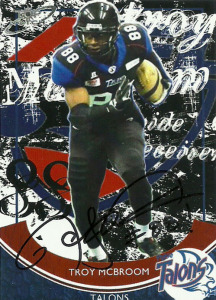 McBroom attended St. Mary’s from 2001-02. He then attended two seasons at Delta College, and two final years at McPhereson College, an NAIA institution in Kansas, earning a degree in Physical Education & Sports Medicine in 2006. During his Senior season at McPherson, Troy had 659 receiving yards (3rd in Conference) and 6 TDs (2nd). He interviewed with the Browns and Titans but went undrafted in the 2006 NFL Draft.

Eventually McBroom ended up on the radar of the Arena Football league. He signed with the Stockton Lightning of the AF2. In his rookie year (2008), he appeared in the final four games of the regular season with the Lightning. Head Coach Chad Carlson liked Troy’s size and work ethic. In his debut McBroom had 10 catches for 110 yards and 4 TDs against the Tennessee Valley Vipers. He’d finish 2008, tallying 30 receptions for 296 yards and eight touchdowns, while averaging 74.0 yards per game.

With the Lightning suspending operations for the 2010 season, McBroom joined the Tulsa Talons of the AF1 in 2011. He earned nominations for Offensive Rookie of the Year, with 149 receptions (4th), for 1,747 yards (4th), and 31 TDs. His 9.9 receptions per game led the league. A separated shoulder in the final contest of 2011 ended his season prematurely as Troy had already set the Talons single season record for receptions, and posted 2nd highest single season receiving yard total in franchise history. Troy also had been invited to camp with the New York Jets, but was unable to attend due to his injury. In 2012, McBroom was assigned to the Chicago Rush, and finished the season on the roster of the Philadelphia Soul.

I approached Troy through Twitter and he was really excited to get his card. He still has the itch to play and is currently in the midst of a comeback bid. I built his Wikipedia entry, that is currently in approval wait hell with the site.