Danny Lockett represents the defensive crown jewel of the big 3 World League sets. He appeared no less than 6 times across ProSet, Ultimate, and Wild Card. Even with his personal information and unique name, he was still difficult to track down, but after much sleuthing, talking to a few connected people, and thanks to the power of social media, I finally was able to find and connect with Danny. I offered him a signing fee of 10.00 per card to ensure that these cards would get signed, and he kindly did so, whipping them around in two weeks time. (It is unknown whether the spelling of his name was an error- or a nickname- or if over the years he’s moved towards Dannie, but for purposes of this post, we will call him Danny.)

A 5th round pick of the Detroit Lions in 1987, Danny played for the Lions through 1988- a year in which he posted 17 tackles, a sack and a fumble recovery.

He’d attend training camp with the New York Jets in 1991 but did not make the squad.

Lockett was then selected in the second round of the 1991 World League of American Football positional draft by the London Monarchs. where he’d go on to have a banner year for the team, as they won World Bowl I over the Barcelona Dragons.

Danny finished in a 3 way tie for Defensive MVP Honors. He’d set multiple league marks along the way, most notably for Most Sacks in a season (13.5), and most consecutive games with at least 2 sacks (10 in first 5 games).

Among his most impactful performances were in the first game against the Knights (3 sacks), and 4 tackles and a fumble recovery in the Monarchs World Bowl I victory.

On the season, Dannie had 74 total tackles, 13.5 sacks, 3 forced fumbles, and 3 fumble recoveries.

It should be noted that Lockett helped the Monarchs lead the league with an astounding 53 sacks- or 5.3 sacks a game.

He returned to the Monarchs for the 1992 season, however the team stumbled out of the gate finishing with a dismal 2-7-1 record. Although Lockett’s numbers were also down, he still had some memorable moments, including scoring 2 touchdowns (interception and fumble) in a Week 9 thumping of the Montreal Machine.

With the World League reorganizing after the 1992 season, Danny like many players was immediately absorbed into the stateside Arena football league system that was taking off.

Danny played the next 5 seasons in Arena Football for 5 different franchises. He saw the most success in 1993 with the Detroit Drive, finishing with 50 total tackles, 8 sacks, 9 pass breakups and 2 fumble recoveries, and an interception. Over the next 4 seasons, Lockett played for the Massachusetts Marauders, Orlando Predators, Connecticut Coyotes, the ill-fated Texas Terror, and finally the Milwaukee Mustangs. 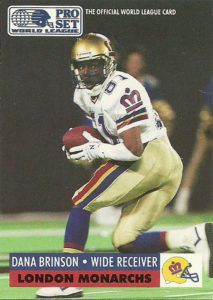 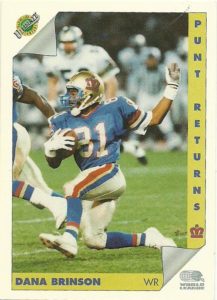 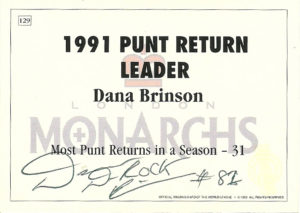 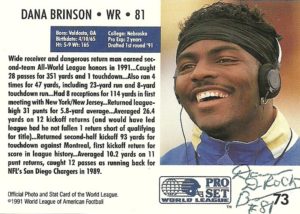 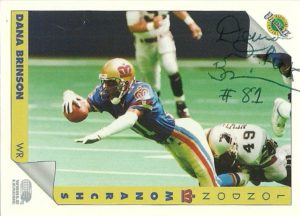