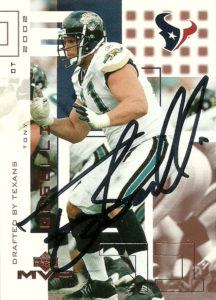 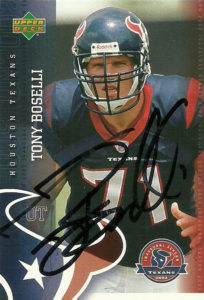 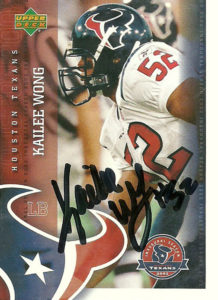 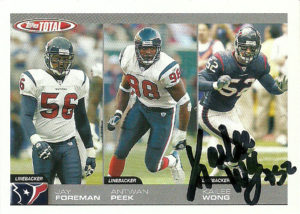 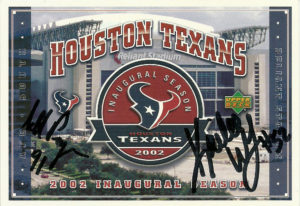 After carving a great stint out at UVA and helping the team to an ACC title in 1995, the Baltimore Ravens selected Jamie Sharper with the 34th pick of the 2nd round in the 1997 NFL draft. An unsung, integral part to the Ravens 2000 title run Jamie’s defining moment with the franchise came in Super Bowl XXXV against the Giants (and former Virginia teammate Tiki Barber) when the historic Baltimore defense held New York without an offensive touchdown in the 35-7 rout.

In 2002, the Houston Texans were conducting their expansion draft from a pool of NFL veterans. Facing salary cap issues, the Ravens left Sharper exposed. In the weeks running up to the special draft for my newly adopted team, I had paid special attention to the list and pegged Sharper as the highest rated player available.  The Texans selected him with their 5th pick, and along with fellow teammate Jermaine Lewis, he joined the fledgling franchise.

Sharper fit well in the Texans’ 3-4 base alignment brought in by head coach Dom Capers. Slotted inside at RILB, Jamie was one of the better linebackers in the league, manhandling ball carriers and marauding for the occasional fumble. He’d help anchor the linebacking corps for the Texans for the next 3 seasons. Defensively the Texans were actually pretty good, but because the offense was so bad along the exterior of the line and quarterback David Carr was pressed into immediate duty, the team had few high points after surprising the Dallas Cowboys in their first regular season game 19-10. In 2003, Jamie led the NFL with a whopping 301 combined tackles, but in the meantime though, and after 3 seasons, most of the expansion players’ contracts matured like a ticking time bomb.  The Texans were pressed into immediate Salary Cap action. Purging nearly all the players from the expansion draft, the thought from the team was by going younger and faster at linebacker, they could also go cheaper and still remain competitive. I was blindsided and incensed. Jamie was given the option of seeking a trade, but because of his larger salary cap number, he eventually was cut and signed with the Seattle Seahawks. The Texans in the meantime were not competitive. They finished a dismal 2-14 and owner Bob McNair wisely cleaned house after the 2005 season. It was a blessing in disguise for Jamie.  In his final season in the NFL, he was a member of the Seahawks first Super Bowl appearance, but a knee injury ended his season after 136 straight NFL starts, and unfortunately his career. I had written Jamie back in 2010, but did not hear back from him. The Texans have an extremely active alumni association of local former players, (much to the organization’s credit,) that reaches out to fans throughout the year. Missing out on a few Academy appearances, since I just couldn’t justify driving 200+ miles for one autograph, I decided to go to the Texans 2013 Kickoff at Kemah- which is a team rally to get fans excited for the upcoming season. Knowing that 3 players were to make an appearance, I packed all my ambassador cards, and lucked out with Jamie. After surviving a blistering 3 hour wait in 100+ degree and 100% humidity, while fighting off a pack of line cutters, I eventually was able to get Jamie on this 2002 expansion franchise card from Upper Deck. He was also very impressed by my Jamie Sharper jersey (yes I am probably the only person who owns one) that I was wearing and offered to sign it, but I told him no, since I like to wear it and probably needed to wash it after waiting so long in the heat. (I think he was a bit disappointed though, so I may retire it with an autograph the next time, if I see him again.) When I asked him which ball carrier he hated or feared the most to tackle, he took a second to respond and told me, “Definitely Barry Sanders.”