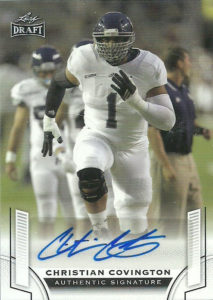 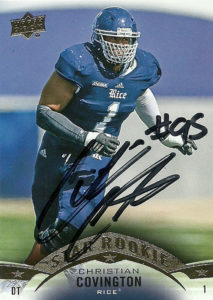 Christian Covington comes from strong bloodlines, as his father was a HoF member of the Canadian Football League. Christian went collegiately to Rice, a school known more for its academics than football prestige. Christian made an immediate impact at defensive tackle for the Owls in 2012, closing out his Freshman year with 43 tackles, 8 tackles for loss, 5 sacks, and a forced fumble.  Getting onto the radar of coaches and the media in 2013, Christian posted 4 sacks, 11.5 tackles for loss, and 59 tackles. He’d be a first team all Conference USA selection as he rotated in also at NT and DE. A big fan of former Rice Owl and Texan ND Kalu, Covington switched his jersey number from 56 to 1 before the 2014 season. Landing on the watch list of many publications and honors before the year began, Covington suffered through an injury marred campaign. He’d declare for the NFL draft and be selected by the Houston Texans during the compensatory selection phase of the 6th round of the 2015 NFL draft. The selection probably broke the hearts of many CFL fans who hoped that the Vancouver, Canada native would not be drafted and slip into the CFL Draft. 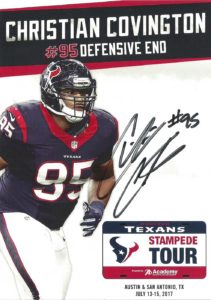 Used sparingly over his rookie season, Covington spelled Big Vince at NT. He’d suit up for 15 games and make 8 total tackles and 2 sacks. His first career sack couldn’t come at a better time. With the Texans coming off a bye at 3-5, they’d face an undefeated Bengals team in Cincinnati. With all of the pundits backing the Bengals, the Texans played their most lights out defensive effort of the year. While the offense sputtered to 10 points, the defense held the high flying Bengals to just 2 field goals. During that game Christian notched his first sack of his career- a ferocious takedown of Bengals quarterback Andy Dalton. After the game nearly all the ESPN commentators, ate a fair amount of crow. The game served notice as the Texans went 6-3 down the stretch to take the division crown and secure a playoff berth.

In 2016, the Texans lost All-Star defender JJ Watt for the majority of the season so Houston had to reshuffle the deck on their defensive line. Covington kicked out to defensive end replacing departed Jared Crick, and finished with 26 tackles and a sack in 5 starts. The Texans defense was brutal. I actually found myself excited when they’d take the field- perhaps maybe because the offense was so anemic. Houston finished with the overall #1 defense for the first time in franchise history. 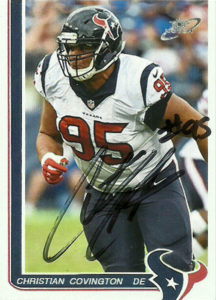 I met Christian and Andre Hal at the Texans 2017 Stampede Tour at 3rd Base in South Austin. The players were extremely cordial, and they both really liked their cards a lot. When I told Christian I’d forgive him for the card in his Rice uniform- he stopped me and asked me where I went to school. When I told him I grew up here in Austin so I naturally bled burnt orange- he rolled his eyes and told me that his mom really wanted him to go to UT.  Andre continued to heckle him. Taking one last look at his Upper Deck card, Christian lamented about how much he missed that face mask. He thanked me for the cards, and I thanked him for that first sack he made in that Bengals game.

During the 2017 season, the Texans went backwards. A combination of injury and a new defensive coordinator, possibly doomed the defense and the team out the door.  Covington too was bit by the injury bug and played in only 7 games. He finished the 2017 campaign with 16 tackles (6 assists) and a sack.

The Texans have been quite kind to the Rice Owls. In addition to Covington,  ND Kalu played for the Texans during his career, and the Texans also selected TE James Casey back in 2009.

I think after this year I’ll retire this particular design of TNT cards. Design tires with age, even if we yearn for a certain look year over year. Still it is a nice photo of Christian I was able to secure for the card.  I absolutely love the Leaf certified card. The autograph is framed very nicely on the canvas and shows up very well. On that note I must mention how I detest exclusive autograph only cards in sets as I much prefer to hunt for autographs, than just buy them. Still this one came at a very cheap price along with the Upper Deck Star Rookies card that I wanted to have him autograph. The Star Rookies card was a bit ugly. I mean it’s original looking in its execution, but I can’t stand it when designers place type along a half circle and the stretched stars on either side made me feel like I was looking at a retired state flag.  I appreciate the hand out that the team gave to fans. It’s a clean canvas with plenty of white space for the image to breathe on, however I think it maybe a bit too much. While the autograph activates the canvas, some other element could’ve been used to help frame it better and hold the eye inside the page.