Bret Stafford was a prototypical drop back passer and one of the first modern era quarterbacks to stand tall in the pocket for the University of Texas, from 1984-1987. He set the school record for most passing yards in a season (2223, 1986), and also career passing yards (4731)- both since surpassed.

Frequently engaged in a quarterback competition or sharing a two-headed quarterback rotation with Todd Dodge for the majority of his time at Texas, Stafford’s numbers were largely skewed by his lack of playing time and having a different offensive coordinator every year. He also transitioned through the Fred Akers era into the David McWilliams epoch.

Although largely forgotten in the pantheon of Longhorn greats, Stafford was a winner with the Longhorns posting 19 victories as the starting quarterback including a 32-27 win over Pitt in the final Bluebonnet Bowl in 1987, when he threw for over 360 yards and 3 TDs.

Stafford was probably the first quarterback I watched play for UT. I had a middling interest in the sport at the time, and I remember reading about the highlights of the Bluebonnet Bowl and being very proud of him going out like that in his final game.

I liked both his Upper Deck entries, but I wasn’t really a fan of the sepia toned All-Time Alumni card- considering how much color photography was used by then in sports.

As I have continued to mature in the hobby, I’ve become stale. I take less and less risks when I send out to addresses. I just haven’t been sending out to unproven addresses. Stafford had no successes on any of the autograph boards I frequent, but he had no attempts, little less an address to send of to, so I figured I’d give it a shot.  It didn’t take Bret long to respond to me- and I was pretty excited about receiving these two back. 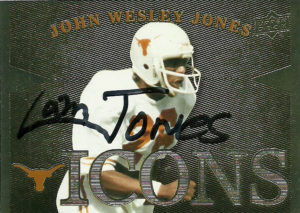 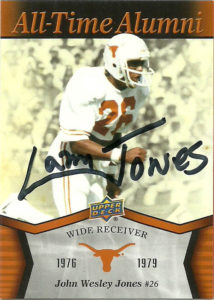 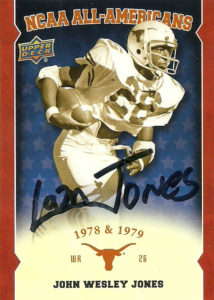 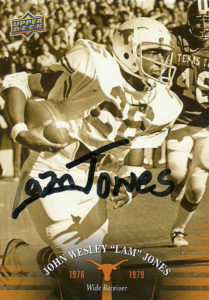 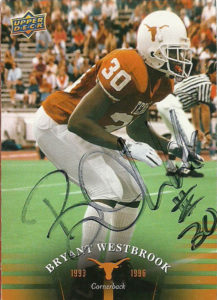 A feared and hard hitting cornerback with sizzling speed who played at the University of Texas from 1993-1996, Bryant Westbrook is one of the more lauded members of DBU. He earned SWC Honors second-team All-American his senior year, in addition to first-team selections in both the last year of the Southwest Conference, and the first year of the Big 12. He finished his career at UT with 9 interceptions, 30 passed defensed, 6 forced fumbles, 183 tackles, and 2 blocked kicks. 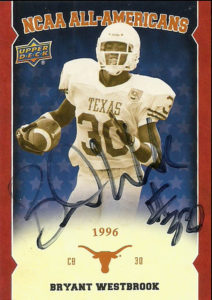 With the hype train in full swing Westbrook’s draft stock spiked up the charts. He was selected with the 6th pick overall by the Detroit Lions in the 1997 NFL Draft, as the second DB off the board.

Bryant had a pretty solid rookie year. He deflected 20 passes- as QBs tested him early and often in his career. Nonetheless he intercepted his first pass from Dan Marino and returned it 62 yards for a TD that year. Bryant landed on the All-Rookie Team at the conclusion of the season.
During 1998, he posted another 19 pass deflections, 3 interceptions, and an 34 yard pick six of Trent Dilfer (TB).  Westbrook suffered a bumpy 1999 as the nicks and tears piled up. He’d be shelved after 8 contests. 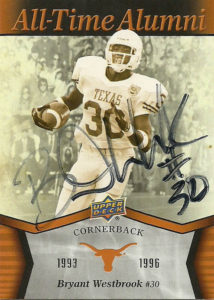 Westbrook returned with a vengeance, as he posted his best season as a pro in 2000. Named as a Pro Bowl alternate, he started 13 games and recorded 6 interceptions for 126 yards including a door-blowing 101 yard pick off and score courtesy of Drew Bledsoe of the Patriots.
Disappointingly he’d miss the last 3 games of the season due to a ruptured Achillies.

It was tough for Bryant, because the next season was a contract year, so he had to get back to the game.  He managed to play in 9 contests in 2001 and recorded an interception, but due to his injury, it was obvious that he had lost a step. 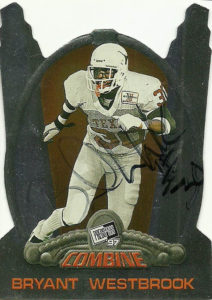 Bryant signed as a free agent with the Dallas Cowboys in 2002.  He’d start the opening contest against the Houston Texans, but the Texans had studied the film and knew that Bryant was a liability. He’d be picked on consistently when he was in the lineup in the Texans’ upset 19-10 victory.  The Cowboys quickly cut him and Westbrook joined the Green Bay Packers and made a pick before the end of the season.  The team hoped to convert him to safety in 2003, but he ruptured his other Achillies- effectively bringing his career to an end.

No regrets for Westbrook however, as he’s giving back to the game by coaching (as of 2017) High School football in Arizona. He signed these 4 cards in no time flat for me.

Come on Upper Deck. You could of done better. The 2011 base card is terrible. Rule number one of something you are going to create in a graphics program for production- never ever noticeably stretch an image. I mean the top of Bryant’s helmet makes him look like he’s got a modified Gazoo on. His All-Time Alumni and NCAA All American cards are the same picture. Really? I looked no further than the Press Pass 97 below it to find a differing action shot of Westbrook. The Press Pass card is a bit kitsch, but I do like the die cut action on it.  In the end I liked Westbrook’s larger than life autograph on his Upper Deck All Time Alumni card the best.