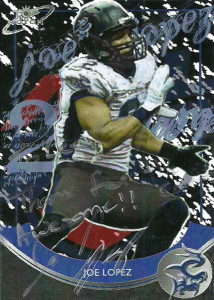 The Talons were ravaged with injuries during their final campaign and their wide receiver and defensive back corps turned into turnstiles at one point.  Joe Lopez had a brief stay on the Talons. There were no acceptable photos that I could find to work with, so I had to doctor an existing shot, like in the Brett Reece card, and I was not disappointed in the results.  After a bit of digging I was able to track Joe down through Twitter where he quickly responded to my request.

Joe Lopez saw his first action in the AFL with the Utah Blaze back in 2011, where he tallied 7 tackles and 1 pass break up. He was assigned to the Gladiators in 2012, and joined the Talons in 2014. A nasty special teams gunner, Joe has the speed and the size to lay a lick on opposing kick returners, recording 9 tackles and 2 assists for the San Antonio. Over his college career at SUNY-Cortland Joe had an interception in 6 straight games, which stands as a school record.

After the game Shannon was seated next to Shane Boyd. When I came up to Shannon and gave him his card, Shane leaned over and told him that I knew about Boyd’s historical contribution to football. Indeed I did- and quoted that Boyd scored the first TD in UFL history for the California Redwoods, which prompted Tevaga to quip that Boyd, “had his own little piece of Jeopardy history.”  Shannon was happy to have a card to call his own and signed this one just as eagerly and quickly as the rest of the team.

Shannon started 41 games for the Bruins earning All-American honors as a Junior, and as a Senior was named a Lombardi watch list candidate. After starting 7 games in 2011, and 10 games in 2012 for the Spokane Shock, Tevaga started all 18 games for the Utah Blaze in 2013. After the Blaze disbanded, Tevaga was allocated to the San Antonio Talons, where the burly bearded Samoan has made his mark.