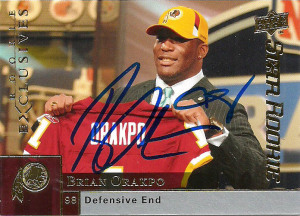 The 13th pick of the 2009 NFL Draft by the Washington Redskins, Brian Orapko had a strong campaign at the University of Texas in college. A slam dunk prospect with good statistics, credentials, and measurables, Orapko did it all for the Longhorns. The Nagurski and Lombardi Award winner in 2009, Brian was a unanimous First Team All-American and Big 12 Defensive Player of the Year, recording 42 tackles (31 solo), 11.5 sacks, 19 TFL, 30 pressures, and four forced fumbles. Over his time at UT, he played in 47 games, starting 21.

It’s no shock to the Longhorn faithful that Orapko paid off for the Redskins, leading all rookies in sacks with 11 to go along with a healthy 50 tackles in 2009. Brian’s 2010 and 2011 campaigns were equally measurable, with 8.5 (56 tackles) and 9.0 (59 tackles) sacks, reminding many Redskin fans of former Secretary of Defense, Dexter Manley.  Two games into his 2012 season Brian blew out one of his pectoral muscles, after only recording 8 tackles and a sack. He returned full force in 2013, enjoying perhaps his finest season as a pro with 10 sacks, 60 tackles, 2 fumble recoveries, and recording his first touchdown on a 29 yard interception. He resigned with the ‘Skins in 2014, but he was slowed by a sprained ankle and a dislocated middle finger on his left hand, before he ultimately tore a pectoral muscle (for the third time in his career) in a contest against the Tennessee Titans, ending his season after 7 games.

Here’s one of my strategies that I use as an in person collector: If you have a couple of cards you want to get signed, stack them compactly together when you present them to the player when you ask for their autograph, so that if you have other neat looking cards you’d like to have autographed, maybe the player will be gracious enough to plow into those and sign them as well.

In this case- it didn’t work at all. I got Brian to sign this professional looking 2009 Upper Deck Star Rookies, but he didn’t jump at the Pacific 2009 I had in my hand waiting to go next. It’s all good. I don’t want to be greedy. Brian was a surprising arrival, as he brought his kid with him. I wasn’t expecting Orapko to be there, so luckily the sacred UT long box of cards I keep in my car came to the rescue.  I am assuming that due to his injury and rehab Brian was able to come to the Total Athlete event on the behest of his UT alum and friend Derrick Johnson.  I think he was trying to be low key about it, and his pointy beard was a bit intimidating. I reinserted myself into a conversation with him after initially getting his autograph.
He told me he’d be a free agent next season, and I asked him to consider the Texans. He chuckled, and I told him to think about the awesome combination of Cushing, Watt, and Orapko. (It isn’t tampering if I’m not a representative of the franchise.) Again he said that he’d think about it, and I bid him a fast recovery.