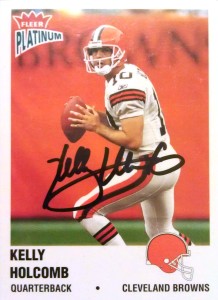 Holcomb joined the Barcelona Dragons in 1996 as a developmental prospect of the Tampa Bay Buccaneers.  He started all 10 games for the franchise as the Dragons finished the season deadlocked at 5-5.  Kelly’s 2,382 yards ranked 3rd in club history. Cut by the Bucs in 1997, he signed with the Indianapolis Colts but got roughed up, throwing 1 TD to 8 picks.  For the remainder of his time in Indianapolis he honed his game on the bench behind ironman Peyton Manning.

In 2001, Kelly joined the Cleveland Browns- a franchise only 3 years removed from being reborn. With starting quarterback Tim Couch epic struggles and fan frustration mounting, Holcomb began to eclipse Couch at quarterback. A post season game in which he led the Browns to a regulation record 429 yards passing, pretty much signaled the end of the Couch Era. In 2003, he started 10 games, throwing for 1,797 yards and 10 TDs. Still erratic play at the position led the Browns to sign Jeff Garcia- and in 2005, Kelly signed with the Buffalo Bills.

Kelly had perhaps his finest season under center with head coach Mike Mularkey in 2005,  throwing for 1,509 yards and 10 TDs in roughly 10 contests. After the season though the Bills decided to go in a different direction and Mularkey was fired. Dick Jauron was named head coach and JP Losman was named starter at quarterback. Holcomb did not start another game in Buffalo, before being traded to the Eagles in 2007,  who then in turn traded him to the Minnesota Vikings. He started 3 games that year and was cut after the season. Kelly retired in 2008, but had an impressive career run there with occasional flashes of brilliance.