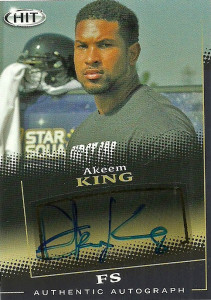 Akeem King converted from wide receiver to safety in 2011 for the San Jose State Spartans. At 6’3″, 211, he ran the 40 in 4.39 seconds- a pretty decent time.  In his Senior year King had 71 tackles, 1.5 tackles for loss, and two pass break-ups, starting all 12 games. Akeem lasted until the 7th round of the 2015 draft. He was selected by the Atlanta Falcons who understand that King is going to need to be coached up and tutored at the NFL level. A project, the Falcons intend to play Akeem first at cornerback.