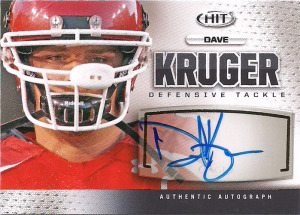 Dave Kruger attended Utah like his big brother before him- NFL linebacker Paul Kruger.  A team captain on defense, Dave played tackle (6’5, 264) and racked up 116 tackles, 3.5 sacks, and a forced fumble in 37 starts.  He was not drafted in 2013 but later signed with the Cleveland Browns. He was cut before the season began and as of 2016 is considered a free agent.