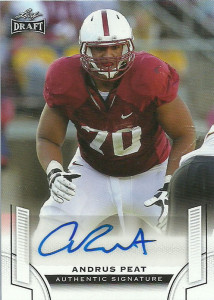 At 6’7″, 313, Andrus Peat certainly has the frame to play in the trenches at the next level. A well decorated lineman, both nationally and at Stanford Andrus is considered an above average pass blocker and a fine drive blocker for the run game.  Scouts also praised his understanding of the pro game and felt that he was one of the most NFL ready offensive linemen to start game 1 of 2015.  He was selected with the 13th pick of the 2015 NFL draft by the New Orleans Saints.