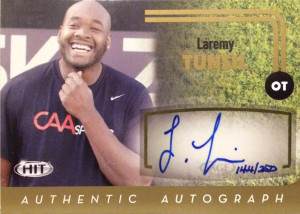 So I thought that I’d grab a hobby box of Sage 2016 and then break it live over Twitter. It was a really good experience and I will probably do it again in the future. Beyond the bevvy of autographs and top end players, I ended up winning a Sage Twitter promotion and earning two more gems for my collection.

Laremy Tunsil is regarded as the top offensive blue chip lineman available in the 2016 draft. A stud at tackle, Tunsil displayed all the power, arm length, and foot shuffle that you’d expect from a top prospect.  Although he has some injury history (dislocated ankle, broken leg, and torn biceps), Laremy has displayed no signs of rust. Laremy considers himself more of a finesse blocker, and displays a nice punch in run blocking.

The Titans with the overall #1 pick of the 2016 draft were linked to Tunsil well before the draft, and asked for a king’s ransom to trade up to the spot, which they eventually got from the reborn LA Rams. In the days before the draft, Tunsil expressed his sadness about not being the overall #1 pick, his step father sued him, and minutes before the draft somebody hacked his Twitter and posted a picture of somebody smoking weed in a gas mask. Ugh. How nightmarish. A certain amount of discomfort could be registered coming off of Tunsil in the Green Room as he awaited to be drafted while he free fell to #13, where the Dolphins were waiting. Laremy will be penciled in as an immediate starter protecting young quarterback  Ryan Tannehill.