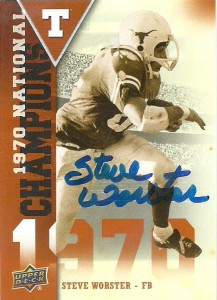 Bruising fullback Steve Woo-Woo Worster was part of a devastating backfield that included  such talent as Chris Gilbert, Jim Bertelsen and Ted Koy. To accommodate all of those skill players, Coach Darrell Royal implemented the Wishbone system at the University of Texas. 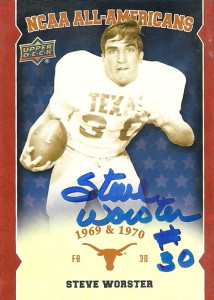 Steve was drafted by the Los Angeles Rams in the 4th round of the 1971 draft, but did not play for the team.  Unable to agree on a contract, Steve headed North to the CFL and joined the Hamilton Tiger-Cats, but after 4 games 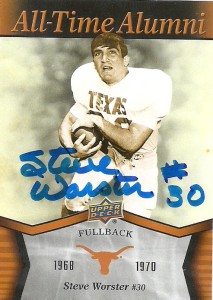 he grew disenchanted with the game and decided to leave the game behind.

He returned to Texas, completed his degree, and got into sales. He’s currently retired and lives outside of Beaumont. Thanks to Zevonfan on Sportscollectors I was able to find an address for him. He signed every card I had of him, minus his UT Upper Deck 2011 base card. On it was a note indicating that the photo from the front of the card was not his. The photo was of Jim Bertelsen and not of Worster and is considered an unreported error card.

A few months ago Zevon on SCN proposed a trade with me.   He really, really wanted a Haywood 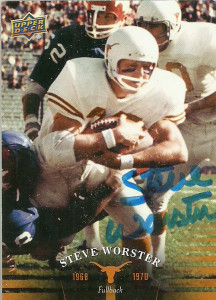 Jeffires from my collection and  in exchange he dangled the Worster base set card I needed. (The problem is, no matter how many I get of Jeffires, it’s become this bizzare tradition that I treasure.) Well luckily enough I ran into him at the Oilers 25th Anniversary Party, where he signed everything I had.  This allowed me to consumate the trade, thus allowing me to knock out a potentially difficult Worster card off my list.