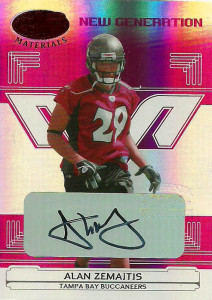 Alan Zemaitis played lights out football for the Nittany Lions, despite being in a life threatening car accident in 2003.  At 6’2″, 202 Zemaitis had the perfect size to play a cover 2 system and was a good match for the Buccaneers who selected  him in the 4th Round of the 2006 draft. Considered initially a first round prospect, Alan’s stock slipped after he struggled with poor measurables before the draft.  Tampa viewed him as an eventual replacement for either Brian Kelly or Ronde Barber.

During a rough rookie season, Zemaitis struggled, and then tore his labrum (shoulder muscle) during practice, landing him on injured reserve for the remainder of the year. He recovered for 2007, but was cut in September of that season.  Alan later played in the CFL for the Hamilton Tiger- Cats in 2008.

He’s gone into coaching since his playing days have ended, serving as a positional coach and defensive coordinator at the high school level.