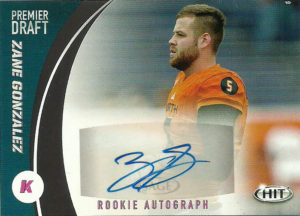 Looking at the stat line, Zane Gonzalez stands first in FBS history nailing 96 field goals over his 4 years at Arizona St.  He’s also pretty accurate hitting about 86% of those attempts, including 23 of 25 as a Senior for the Sun Devils. Gonzalez has a strong leg and has steadily improved over the last 3 years. Scouts ding him on the angle he takes in pursuit of kick returners, but let’s face it- he’s a kicker, not a torpedo.  Facts aside that he’s not Neil Rackers, Gonzalez was selected in the seventh round of the 2017 draft by the Cleveland Browns, where he will go head to head with Cody Parkey in camp.