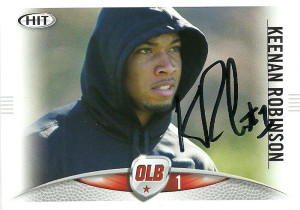 The Redskins took the training wheels off Keenan Robinson in 2014 when he replaced longtime starting linebacker London Fletcher. Keenan had 71 tackles (33 assists), 1.5 sacks, 6 TFL, 3 passes defensed, and a fumble recovery in 13 games this last season.  In back to back seasons, Robinson had season ending injuries before the season began, but he took the best from it and decided to play relentlessly- because any day it could all be over. With an increased fire for the game, Robinson had assumed duties as the defensive play caller in the huddle in 2015. 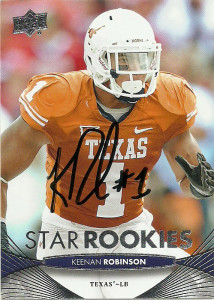 In 2016 Keenan was surprisingly allowed to sign with the division rival New York Giants. He dressed for all 16 games and started 6 at middle linebacker putting up 79 total tackles and 7 pass deflections. An athletic and speedy defender, Keenan has the speed to keep up with runningbacks and tight ends in pass coverage. He also has the odd honor of picking off Tom Brady twice in his short career.

Robinson was being interviewed off to the side at the Lone Star Showcase. He was very happy to sign anything that anybody had at the event and patiently talked to every fan if they had something to say. The Showcase was fun, but listening to kids participating in the Showcase chide and heckle fans and adults who wanted autographs was a disappointing sight. It’s easy to bite the hand that feeds you if you do not understand that: Simply put, fans dollars are what keep the sport going and fan patronage is what pays for camps for kids.